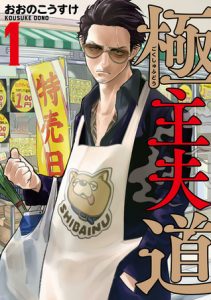 I don’t know who needs to hear this (everyone?), but The Way of the Househusband is getting an anime (Netflix) this year, so if you haven’t yet discovered this hilarious, wholesome and infinitely uplifting manga series, check it out before it comes out on Netflix – you won’t regret it: Cute puppers? Check. Incredible artwork that captures expressions that border on grotesquely realistic but remain firmly rooted in the manga style? Check. Non-sequiturs flying about based on puns and misunderstandings (because Tatsu is a former yakuza who looks the part)? Check, check, check! A surprising feminist icon highlighting how much invisible labour housewives take on, giving value to that labour and making sure everyone he encounters understands how much work being a house(wife/husband) is? CHECK. 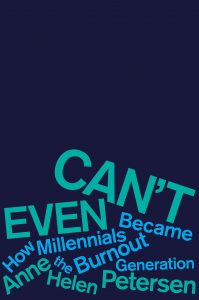 You might have noticed that I mentioned housewives specifically, and that’s because division of labour is generally weighted much more heavily for women than men in man/woman couple households, something that has been noted basically everywhere, it seems (and has become ever more glaring in the midst of the pandemic, now that we’re all stuck at home), but that I was reminded of again in Can’t Even by Anne Helen Peterson, author of the essay that went viral on Buzzfeed: How Millennials Became the Burnout Generation. In fact, Peterson uses Japan to illustrate how burnout could affect the future, as Japan’s fertility rate continues to decrease: “In 2015, nearly a quarter of women [between the ages of thirty-five to thirty-nine] were unmarried. Zoom out and it’s easy to see why: Once they are married, working women are still expected to perform the vast majority of labor in the homes, and for their children… According to one study of government data, Japanese women who work more than forty-nine hours a week still do close to twenty-five hours of housework a week. Their husbands still average less than five” (Peterson, Can’t Even: Conclusion; emphasis in original). 25 hours to their husbands’ 5, per week! Added up over a year, that’s 20h/week x 52 weeks = 1040 hours/year = 43.33 days that working Japanese women do more than their husbands. That’s almost a month and a half. Keeping in mind that corporate culture is incredibly different in Japan as compared to North America, in that unpaid overtime is not uncommon, as well as the expectation that workers will “regularly entertain clients and bosses” (how this has been impacted in the long run by the pandemic is uncertain, though the pandemic has made some families take a closer look at household duty distribution) – to the extent that “Of the full year available to working fathers, the average man took just five days” (emphasis in original) – even in cases where husbands want to contribute to household tasks, it can be difficult to do so as a result. That said, it’s unclear in Can’t Even whether the expectation embedded in the corporate culture that workers do overtime as a matter of course and participate in drinking dinners/parties with their coworkers and bosses also applies to women as much as it does to men, which would make it even more difficult for a woman getting married to do all that and take on all the household duties (including childcare).

Which, actually, is portrayed pretty well in The Way of the Househusband with the reversal of traditional gender roles in the form of Tatsu’s wife, Miku, a hardworking designer who is kept very busy at work, making it difficult for her to spend much time at home and help with the household duties. She is also, conveniently and for comic relief, catastrophically terrible at them – but it’s not because she’s terrible at household chores that she doesn’t do them! She tries to help (to Tatsu’s chagrin) when she has time off work, in an attempt to help Tatsu with the work he puts into the household. (She is apparently completely oblivious regarding her own competency at household tasks, so the offers to help are not mean-spirited in the least.)

But wait. Before we move on. Is Tatsu even a millennial? According to AsianWiki, he’s 38 in the live action series – YES YOU READ THAT RIGHT: A LIVE ACTION DRAMA – which was released 2020, which means he was born in 1982 if he turned 38 in 2020. The first episode was released October 2020, so I guess chances are high that his birthday already passed, right? Because otherwise he’s really just on the cusp being born in 1981, which according to the Pew Research Centre is one end of the millennial cutoff. Phew. So everything still applies to this household.

OK. So given the rate of birth in Japan, the possible influence of cultural expectations regarding housework/labour division upon marriage, and the very in-your-face message that housework is important and not to look down on what housewives/househusbands do, here’s my absolutely has-no-basis-in-reality theory: Is the release of Gokushufudou as an anime (following close on the heels of its release as a live action drama series starting October 2020) actually an instructional series to show its viewers that housework is in fact something that is of value and that takes up quite a bit of time and effort, that helps keep things running smoothly, only noticed when things go awry? Is it meant to underscore the message that doing all these household chores and learning how to do them properly (as Tatsu does! I could watch him fold laundry all day) has absolutely no impact on manliness?? That the stereotypically manliest of the men, a yakuza legend whose name inspires fear and awe in all who know of him and his deeds, is rendered no less manly by his unabashed love of cute puppers, love of household chores, a doting father of an adopted daughter (in the live action) – seeking out new ways to do things around the house and making elaborate cute bento boxes for Miku – and love of sweets galore? Is this actually… to help reverse the fertility rate?? By encouraging men to take up more of the household duties, thus sending out the message that women who marry won’t be marrying into an endless loop of laundry, cooking, work, childcare, scheduling, and more – that she, too, can have a fulfilling life where their identity and life won’t be completely eclipsed by such expectations? There’s my wild conjecture there, and while I kind of want there to be more than just the use of the stereotypical yakuza look for comedic effect, it’s entirely possible I’m reading too much into this and this series is getting produced left right and centre because it’s good. but back to the topic at hand, check out the promo poster posted by Netflix:

Japan’s most evil yakuza makes its cutest househusband! Follow Tatsu’s journey from underworld legend to domestic bliss when the anime adaptation of Kousuke Oono’s hit comedy manga The Way of the Househusband premieres in 2021. pic.twitter.com/V7tdVIaYVc

If you want to supplement your reading of the manga from our catalogue as we all wait with bated breath for Tatsu to arrive on Netflix, check out the promotional videos on YouTube (scroll down on the Wikipedia article), which are animated promotional manga videos, in Japanese (no subs). And while we’re at it, if you want some more series to read while you’re waiting for the anime release, check some of these out:

4 thoughts on “The Way of the Househusband and… Burnout”