“The act of walking for many had become of symbolic importance. Once, a pool driver stopped beside an elderly woman who was trudging along with obvious difficulty. “Jump in grandmother,” he said, “you don’t need to walk.” She waved him off, “I’m not walking for myself,” she explained, “I’m walking for my children and my grandchildren.” And she continued toward home on foot.” I want to draw attention to a true gem in our collection; the e-audiobook of Martin Luther King Jr.’s incredible book, Stride Toward Freedom: a first-person (and sometimes tremendously personal) narrative of the Montgomery Story from King’s perspective. From December the 5th, 1955 (following the arrest of Rosa Parks, who refused to give up her seat on a city bus when ordered to) until December 20, 1956, the Black community in Montgomery, Alabama boycotted the city buses. At the time, the history of mistreatment on those buses was so rampant that there was scarcely anybody who had not either witnessed, heard of, or themselves experienced some incident of indignity or injustice. In one extreme case, a man was shot and killed because he refused to exit the bus unless his ten-cent fare was returned to him. The driver had ordered him to exit the front doors and reenter through the back doors. The bus was so jammed that he would not have been able to do so, but he agreed to leave the bus entirely so long as his fare was returned. Many times, bus drivers would give this order—to reenter the bus from the back doors—only to drive off before the person could reach those doors. In another case, a man’s leg was shut in the door as his wife attempted to assist him off of the bus and he was dragged some way along before the driver finally stopped. A fifteen-year-old girl, Claudette Colvin, was arrested on charges of assault and battery, disorderly conduct and violation of a city ordinance for refusing to give up her seat and move to the assigned section.  The rampant nature of stories such as these is the reason why Martin Luther King Jr. writes in Stride Toward Freedom that while Mrs. Parks’ arrest may have precipitated the protest, it was not the cause. Those roots ran far deeper. My interest in King and the Montgomery Story has been budding and building over the past two years. In part, it is because I have bumped into King and this story in various places; in Simon Sinek’s works, in Charles Duhigg’s book The Power of Habit and on one of my excursions to the American Library Association’s website where I came across a quote from Stride Toward Freedom that supplied me (in true ALA fashion) with a citation directing me to the correct source: “True peace is not merely the absence of tension, but the presence of justice,” it read.  And so, equipped with the book’s title, a library card, and an activated hoopla membership, I figured that there would be no better time to begin reading Stride Toward Freedom than in the first days of February. 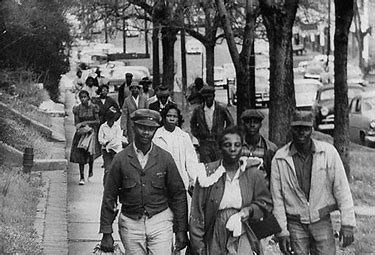 For 381 days, people walked, shared rides or found other creative ways to get to and from work.  The opposition did whatever they could to make this difficult: challenging the legality of taxi companies accepting lower fares, printing false stories, making multiple nebulous arrests and eventually inciting acts of violence so that many people’s homes were bombed (including King’s) in an effort to scare people back onto the buses–but the Black community never faltered or struck back.  King’s dedication to love and nonviolence was awe-inspiring.  I had not been fully aware of the spirituality or religiosity of King’s person before reading this book (thinking of him only as a great political figure) but his ideas were incredibly spiritual and philosophical in nature.  King regarded the material and the divine as interwoven elements of reality (or at least as two interrelated realities) rather than as irreconcilable, mutually exclusive entities.  While he was someone who would have preached about the spiritual good, he believed that working for social good in the real world went hand in hand with that.

I listened with interest as King briefly grappled with concerns over whether the boycott could truly be called a moral course of action because (first) it would indeed inflict duress on the bus system and (second) the boycotting tactic had been used by other groups in the past to pressure and intimidate—to harm and destroy.  King expressed a genuine belief in the value of every human being, so far as to vehemently oppose inflicting any injury on anybody, however noble the cause.  He concluded, however (much inspired by Thoreau’s essay Civil Disobedience, he cites) that what was genuinely happening was “a refusal to cooperate with an evil system,” and he writes that he seldom used the word ‘boycott’ personally when he spoke of it going forward, conceptualizing the movement in a more creative and loving light.  King was particularly inspired by both the Gandhian stance as well as the Christian stance; “Gandhi resisted evil with as much vigor and power as the violent resister, but he resisted with love instead of hate. True passivism is not unrealistic submission to the evil power… it is rather a courageous confrontation of evil by the power of love, in the faith that it is better to be the recipient of violence than the inflictor of it, since the latter only multiplies the existence of violence and bitterness in the universe, while the former may develop a sense of shame in the opponent and thereby bring about a transformation and change of heart.” And as he said in an early speech while the protest was being set in motion (prepared in less than 15 minutes on an empty stomach, no less, compared to the usual 15 hours that he usually spent preparing); “I want to say that we are not here advocating violence. We have never done that. I want it to be known throughout Montgomery and throughout this nation that we are Christian people. We believe in the Christian religion. We believe in the teachings of Jesus. The only weapon that we have in our hands this evening is the weapon of protest. That’s all… We only assemble here because of our desire to see right exist.”  I hadn’t previously realized that either of these worldviews had been so involved in the story, and I was fascinated.  The movement was one of love, courage and human dignity. As King impresses throughout the book, the focus was on the good, and the sometimes-literal striding toward an improved world. 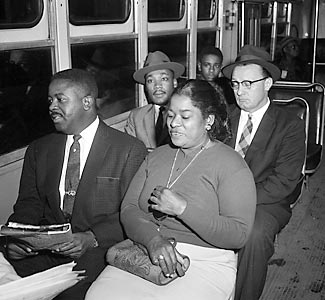 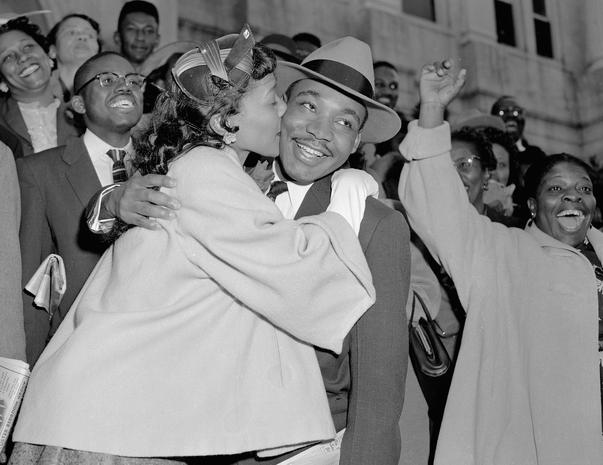 On November 13, 1956, racial segregation on city buses was ruled unconstitutional, and on December 21, 1956, King boarded the first non-segregated bus to drive in Montgomery.

I cannot recommend this book highly enough—I went through about two hours per day, and couldn’t wait to get to the next part of it whenever I had to stop listening. It was a compelling, informative and inspiring read.

The streaming audiobook is available on hoopla (hoopla is free to use with a Vaughan Public Library membership–once you’ve made a hoopla account, you can check out up to five digital items per month, including e-books, e-audiobooks, television and film). I suggest downloading the app if you have a smartphone or tablet and taking the book with you on your daily travels. It was simply excellent, and February being Black History Month, it was the perfect time to dive in. 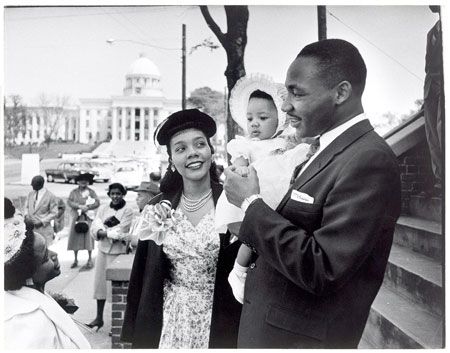 “We must rapidly begin to shift from a “thing-oriented” society to a “person-oriented” society.  When machines and computers, profit motives and property rights are considered more important than people, the giant triplets of racism, materialism, and militarism are incapable of being conquered.” –Martin Luther King Jr.

2 thoughts on “Stride Toward Freedom”