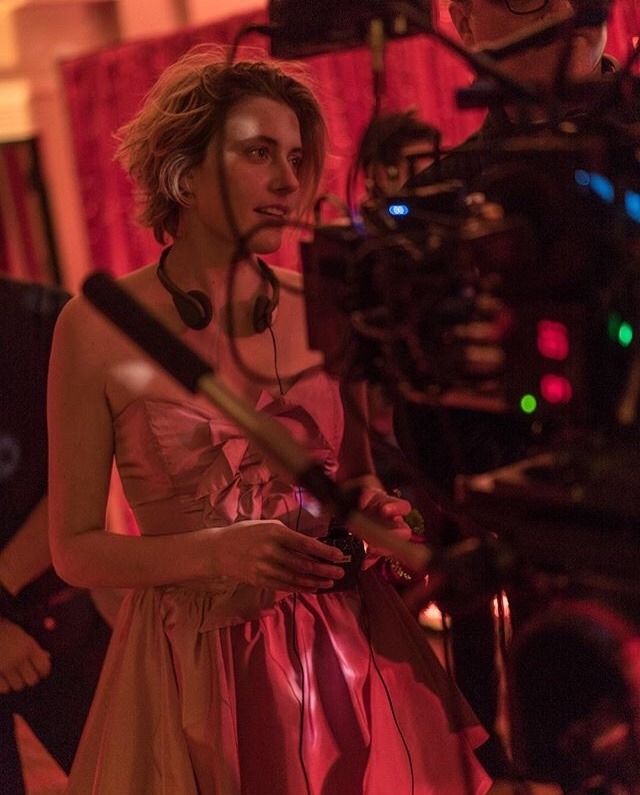 Greta Gerwig, ©Merie Wallace and A24

Some people might question the value of putting female directors in a spotlight, and to them I say: the fact that it’s a question at all is reason enough. Just look at the general reaction from the public whenever someone singles out female achievement. The knee-jerk response tends to be “who cares?” and “doesn’t equality mean treating everybody equally?” Well, yes and no. In a perfect world, yes. In our systemically biased world, no. Let’s break it down into numbers. 2019 has seen a record high of female directors in high-profile films, and do you know what that record high is? 12 (potentially 14!) of the 100 top-grossing films. That’s 12%. TWELVE. The fact that this number is being celebrated is both exciting and deeply, deeply sad. So while I would love to take women’s achievements in directing for granted, we’re still in a place where a woman succeeding behind the camera is a minor novelty. So yes, let’s continue to spotlight them, until it’s no longer interesting to do so!

But why should we care about women behind the camera? Well, for the same reason that it’s important for anyone to be behind the camera: to exert some level of control over representation, to give audiences as organic experience as possible. This is true of POC directors, LGBTQ+ directors, even white male directors. We all want our stories told, and we all want our stories to be appreciated. True representation brings us closer to something resembling understanding. Allowing people to tell their own stories opens up new worlds to audiences, which they may never have been able to experience otherwise. To quote Pocahontas (a problematic movie, I know—indulge me), “you’ll learn things you never knew you never knew.” We all have our own unique experiences and perspectives, which allow us to interpret the world differently and in turn provide insight for others that may not come naturally to them. None of us are born omniscient; we learn through exposure. Film is a helpful, no-brainer medium for that.

Representation is also a way to circumvent the usual biases that are so entrenched in film culture that most of us don’t even notice them—until they’re pointed out, and then they’re all you see. Take the Bechdel Test, for example: an embarrassingly simple concept that films very often fail. What is the test? Take any movie, and notice if any two named female characters speak to each other even once about something other than a man. Of course, this is not a perfect test; sometimes movies are about men. And that’s fine. Problems arise when women function only as accessories, as props to drive male narratives. Hence the importance of female filmmakers, and the stories they want to tell.

This year, the female-directed films on offer are far-ranging in subject matter, scope, and tone, which is definitely an exciting development. Below, I’ve singled out five films in no particular order, that demonstrate the diversity of vision supplied to us by female directors this year.

If you haven’t seen this one yet, I don’t know what you’re waiting for. Jennifer Lopez does a strip tease to “Criminal” by Fiona Apple. That’s it. That’s all you need to know. Just kidding (kind of). Hustlers is about more than just JLo dancing. I put this one in the Magic Mike camp: a movie about strippers that is way better than it needs to be, with a remarkably engaging plot. In Hustlers’ case, the plot revolves around the 2008 financial crash, and the hustler (hmmm) economy that was born from it. Because it’s directed by a woman, the traditional “male gaze” is averted, which is crucial in a story about female strippers. So: no titillating camera work, no uncomfortable lingering shots on women’s bodies. Sure, they’re naked (or close to it) a lot of the time, but the women are treated like what they are: human beings doing a job. Also notable is the fact that these ladies aren’t always likeable. The unlikeable female protagonist is a relatively new phenomenon, since women for so long were only allowed to be saints, ass-kicking heroes or villains. It’s a concept we’re still struggling with (for example, some people don’t like Captain Marvel because she doesn’t smile enough), but the ladies of Hustlers are none of the above. They’re sexy, sometimes villainous, conflicted, sympathetic, real. Scafaria isn’t asking you to agree with them—just to see them as they are.

#HUSTLERS was a JOY. Jennifer Lopez is a BEAST. Cardi is a natural talent. Seeing a movie like this with a woman (Lorene Scafaria) behind the camera gave it such a different energy than you traditionally get in a genre men like Soderbergh and Scorsese have made their own.

There are two powerhouse women behind this one: director Matsoukas (who directed the most perfect music video to ever grace our screens: Beyoncé’s “Formation”) and Lena Waithe, who wrote and starred in one of the best episodes of Master of None. Queen & Slim stars Jodie Turner-Smith and Daniel Kaluuya (of Get Out fame) in a modern Thelma and Louise style, fugitives-on-the-run tale about race relations in America. The impetus for the action here is a routine roadside stop by the police that, as it often does in America, turns violent. The cop is killed, and our two main characters go on the run. Unlike Thelma and Louise though, the altercation has been filmed and becomes a viral sensation, turning the pair into folk heroes for the public. It’s a political drama/thriller, but also a love story. And Matsoukas knew what she was doing when she casted two dark-skinned black actors for this love story: “I thought [that] was really important. I’ve never seen that represented on screen.” Another embarrassingly simple way that film culture has failed in representation. A woman of colour behind the camera, who is able to spot and remedy these failures, can only be a good thing.

Something special happens when artists who respect each other come together. #QueenAndSlim 11.27 pic.twitter.com/Zg2MfWyj49

Portrait of a Lady on Fire (Celine Sciamma)

A movie that one TIFF-goer called “nothing but the female gaze” and that some people are calling (perhaps simplistically) “this year’s Call Me By Your Name”, two things that speak directly to my interests. Helmed by French director Celine Sciamma, Portrait of a Lady on Fire is a queer love story set amidst sublime European scenery, which is probably what’s drawing the CMBYN comparisons. But this time we’re in Brittany, not Italy, and the film is very pointedly about women. Speaking almost directly to the issues of representation versus the male gaze, Sciamma’s film deliberately illuminates a historical figure who is basically invisible: a gay female artist in the 18th century (a time when nobody was taking anything a woman did seriously, let alone art). How would we understand the history of the Western world, if we had valued a more diverse array of stories? As Variety points out, “one can hardly ignore the fact, as true then as it is now, that the world looks different when seen through a woman’s eyes.” The film is also drawing comparisons to Hitchcock’s thrilling, borderline erotic style, with the chilling unease of Rebecca and the swirling, building obsession of Vertigo. There’s no chance of a wide release for this one, but look for it in our library catalogue probably in the spring of 2020.

PORTRAIT OF A LADY ON FIRE director Céline Sciamma wants to see 50/50 representation of women filmmakers in French cinema — and believes that there’s a lot to learn from Canada to get there. #TIFF19 #ShareHerJourney pic.twitter.com/OY9gUP0xQN

The great Greta Gerwig returns from her Lady Bird high to fill some big shoes. 1994’s Little Women is a beloved, if imperfect, adaptation of the classic American novel, but it looks like Gerwig is shaking things up this time with a non-linear approach. And the cast? *Chef’s kiss* We have a lineup that includes Saoirse Ronan, Emma Watson, Meryl Streep, Laura Dern, and the May Queen herself Florence Pugh, who has been a particular standout in reviews so far. I, for one, am already obsessed with the scene where sister Jo (Ronan) passionately defends a woman’s worth. And if anyone out there is still in their Jo/Laurie feelings, as I am and always will be, this is another chance for us to be heartbroken over that ill-fated romantic pairing! Yay! This story is 150 years old and still breaking hearts every year. (Fun fact: the decision to break up this pair was entirely spite-based. The novel had been published in two parts, part one being a massive hit. As fans followed the story, the Jo/Laurie fanbase grew louder and more obnoxious, and author Louisa May Alcott was fed up with the demands that they marry. The result? No Jo/Laurie marriage for anyone. Congratulations to Little Women for having the original toxic fandom, I guess?) Anyway, this enduring story about a feisty group of sisters is perfect Christmas viewing. Plus, this is the second Gerwig movie to feature Saoirse Ronan yelling at Timothée Chalamet, and I sincerely hope there will be a third (and while you’re here, check out this power duo’s swoon-worthy profile in Entertainment Weekly).

In Wang’s The Farewell, main character Billi struggles with the opposing value systems of her Chinese family and her American upbringing. When the family matriarch, Billi’s grandmother, is diagnosed with terminal cancer, the family decides to keep the information from her, much to Billi’s consternation. Her family has their reasons, but which Billi is conflicted. Funnily enough (or not, really), American studios seemed to be just as confused about this film as Billi is about her family’s decisions. Was this a Chinese movie? An American one? Oh, there’s a wedding in it—is it “My Big Fat Chinese Wedding?” Allow me to say: yikes. The good news is that Wang was ultimately allowed to create the movie she wanted; one that was neither fully Chinese nor American—just like her. Her approach to the story? As she told The Guardian, it was in a distinctly (white) male way: “I had to take on that audacity of saying, ‘I don’t care if you don’t understand. This is my reality, and I’m going to assume you do.’” She also nabbed a buzzy star: Awkwafina is probably best known as the hilarious best friend from last year’s gigantic hit Crazy Rich Asians, but The Farewell proves she can also pull off quiet and introspective.

This calls attention to the delineation of “foreign film” vs “foreign-language film”. Which makes more sense? Can a “foreign film” be in OUR language (i.e. English)? Can a domestic (i.e American) film be in a foreign language? What does it mean to be foreign? And to be American? https://t.co/JqyvVeW5RQ

For more films directed by women this year, you can check out this list. As the films roll out to theatres and onto DVD, we hope to add most of them to our library collection, so remember to check back!

One thought on “Spotlight On: Female Directors”