“Paris holds the key to her heart” sings the cast of Anastasia in director Don Bluth and Gary Goldman’s 1997 epic animated drama. They could well have been singing about my lingering book-browsing habit—if it has Paris, it has potential. From The Dictionary of Animal Languages to Minette’s Feast (an adorable picture book told from the perspective of Julia Child’s cat), to (obviously) My Life in France, I seem content to loiter in abstractions of this city. One of my favorite movies, Midnight in Paris, goes a long way to describe why this is such a common sentiment. I must admit, however, that it wasn’t the Paris-element that had me taking Rooftoppers home from my local library—no, it was the first line of the book, as follows:

“On the morning of its first birthday, a baby was found floating in a cello case in the middle of the English Channel. It was the only living thing for miles. Just the baby, and some dining room chairs, and the tip of a ship disappearing into the ocean.”

It’s not often that you recognize yourself in a story with such obscure specificity. I may not have survived a shipwreck in the English Channel on my first birthday, but I did have many a nap in large instrument cases at about the same age (guitar cases not cello, but close enough). I rather think it was clever—and resourceful—of my mother to use the soft, velvet-lined interiors of those receptacles for this purpose when we were travelling, and I think Charles Maxim (one of the lead characters in Rooftoppers) would have robustly approved. He’s the sort of person who allows climbing vines to grow in through his window and poetry to be scribbled on his walls and ice-cream to be eaten deliberately in the rain. I love how his character is introduced (on the second page and by this time, mind you, I was already sold on the book):

“Think of nightime with a speaking voice. Or think of how moonlight might talk, or think of ink, if ink had vocal chords. Give those things a narrow, aristocratic face with hooked eyebrows, and long arms and legs, and that is what the baby saw as she was lifted out of her cello case and up into safety.”

One of my favourite authors (and people in general) is Gretchen Rubin—she is an outspoken lover of children’s literature and is a member of four book groups that read junior fiction. I therefore don’t feel the slightest bit abashed to say that Rooftoppers is just such a book. As C. S. Lewis wrote, “a children’s story which is enjoyed only by children is a bad children’s story,” and Rooftoppers was overall one of the better recently-published chapter books for children that I have read. The storytelling is solid and the language is delicious; Katherine Rundell is a master-chef with the written word. She has been

compared to the likes of Roald Dahl and Philip Pullman, and I don’t deny her that. Keep in mind that new authors have some true giants to be measured alongside; they are not competing against their contemporaries so much as against E.B. White, Louisa May Alcott, L.M. Montgommery, J. M. Barrie, L. Frank Baum, C. S. Lewis, and Lewis Carroll. All of history, the best of the best, vie for the readership of the living. As David Ulin relays in his wonderful book The Lost Art of Reading, “Less than four hundred years ago—barely a century after Gutenberg—John Milton could still pride himself without exaggeration on having read every book then available.” No longer. We modern readers have an obscene quantity of options, and we will not in a hundred years be able to read it all. For this reason alone, it’s a big deal when any book is good enough to command our attention at the exclusion of all else. Rundell herself is working on a new book that is meant “to encourage more adults to take children’s books seriously.” She writes, “Plunge yourself soul-forward into a children’s book: see if you do not find in them an unexpected alchemy; if they will not un-dig in you something half hidden and half forgotten,” which brings us to Rooftoppers.

Sophie (our “lightning-haired” heroine) is the baby who is rescued from the cello case and Charles becomes her devoted caregiver (although Miss. Eliot, the child services supervisor, would insist that Sophie is his ward and not his child).  When children’s services threatens to take 12-year-old Sophie away from messy, bookish, homeschooling, tall, loquacious and unconventional Charles, the two run from the authorities and head to Paris, led there by the one and only clue as to the whereabouts of Sophie’s long-lost (and presumably deceased) mother. Much in the same vein as the ‘Together in Paris’ necklace belonging to Bluth and Goldman’s Anastasia, Sophie finds a Paris address inside of the cello case that she was found in as a baby. She meets a boy called Matteo who lives on the Rooftops of Paris—a ‘rooftopper’—and the story really takes off from there. I was constantly struggling with whether this book ought to be gobbled up like a mouthful of whipple-scrumptious fudgemallow delight or savoured nibble by nibble (I ended up doing a sloppy mixture of the two).

Here are five of my favourite samples from the book:

Rooftoppers won the Waterstones Children’s Book Prize and the Blue Peter Book Award for Best Story, and it was short-listed for the Carnegie Medal. 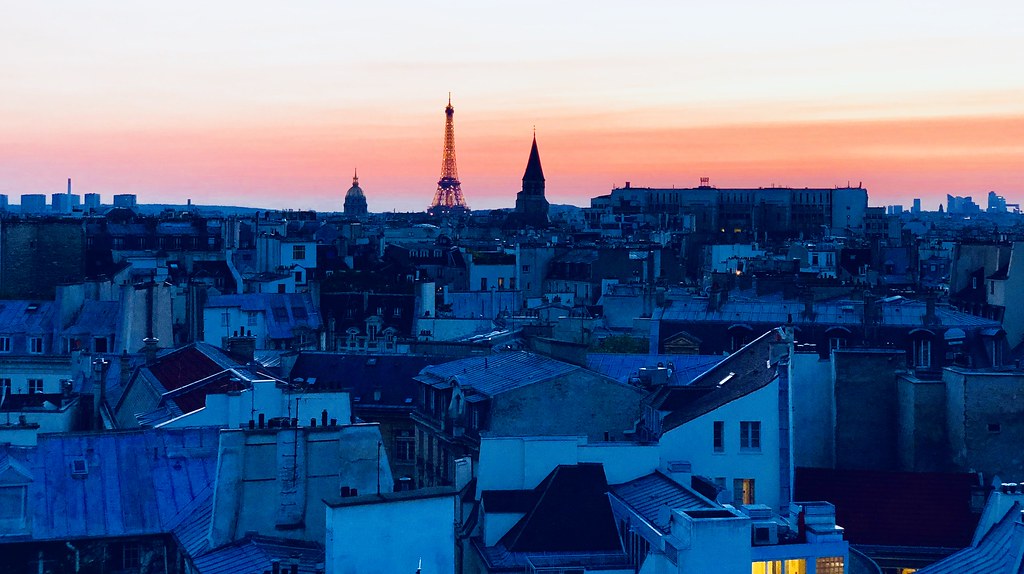