In her book, Happier at Home, Gretchen Rubin writes about suddenly discovering her own decades-long love of miniatures (dollhouse furniture, tiny sculptures and scenes, etcetera), describing that knowing herself better, even in this small way (pun intended), lent itself to greater happiness. Steve Jobs credits tuning into his own seemingly-unimportant interest in a college calligraphy class to his eventual success with the typography of Macintosh computers and according to Helen Russell (author of The Year of Living Danishly), Danes credit some of their famed happiness to ascribing less import to a career’s salary and more to how interesting the job is to the individual. The creator of SpongeBob SquarePants, Steven Hillenburg, had a childhood fascination with the ocean and with visual arts; he was a marine biology teacher interested in working with children before eventually dreaming up the famous (and bracingly optimistic) sponge. It seems to me that wherever they may mysteriously come from, our interests are worth noticing. They are not always the all-encompassing ones that will come to define our time here on the planet, but I think that even the little ones are of value. This is a small, krill-sized interest that I uncovered from an unassuming stack of books (my home is filled with stacks of books, I’m pretty sure it’s my primary decorating aesthetic). If you’ve ever found yourself in your own thematic reading nook, you’ll know that it can be good fun and I especially like that this one crept up on me without any special design on my part—I just looked down at my desk one day and saw a small pile of books that (it suddenly occurred to me) belonged together.

The Uncorker of Ocean Bottles

Written by Michelle Cuevas and Illustrated by Erin E. Stead

I admit, it was the artwork that got me with this one. I know that you’re not supposed to judge a book based on appearances and I think there’s some truth to that, but I’ve also found some great books this way, so who’s to say? I think the spirit of the expression ‘not to judge a book by its cover’ may have more to do with not missing out on those magical few that defy us with their underwhelming outward forms—they are out there and are absolutely worth seeking. With its charming character representations, delicate lines, and soft colours, however, The Uncorker of Ocean Bottles does not fall into this elusive category. In the book, our hero faithfully delivers the letters that arrive in from the ocean, but secretly—not especially optimistically—he wishes that someone would write a letter to him. It reminds me a lot of the fifth and final story in Frog and Toad are Friends (a fantastic book for newer readers): Toad sits and waits for the mail every day (it is his ‘sad time of the day’ because he never gets any mail) until one day Frog has an idea that will make Toad feel better. As Cuevas writes, “a letter can hold the treasure of a clam-hugged pearl,” and I think that like birthday cakes, snowmen, and bedtime stories, handwritten letters are a custom worth keeping around a while longer. . 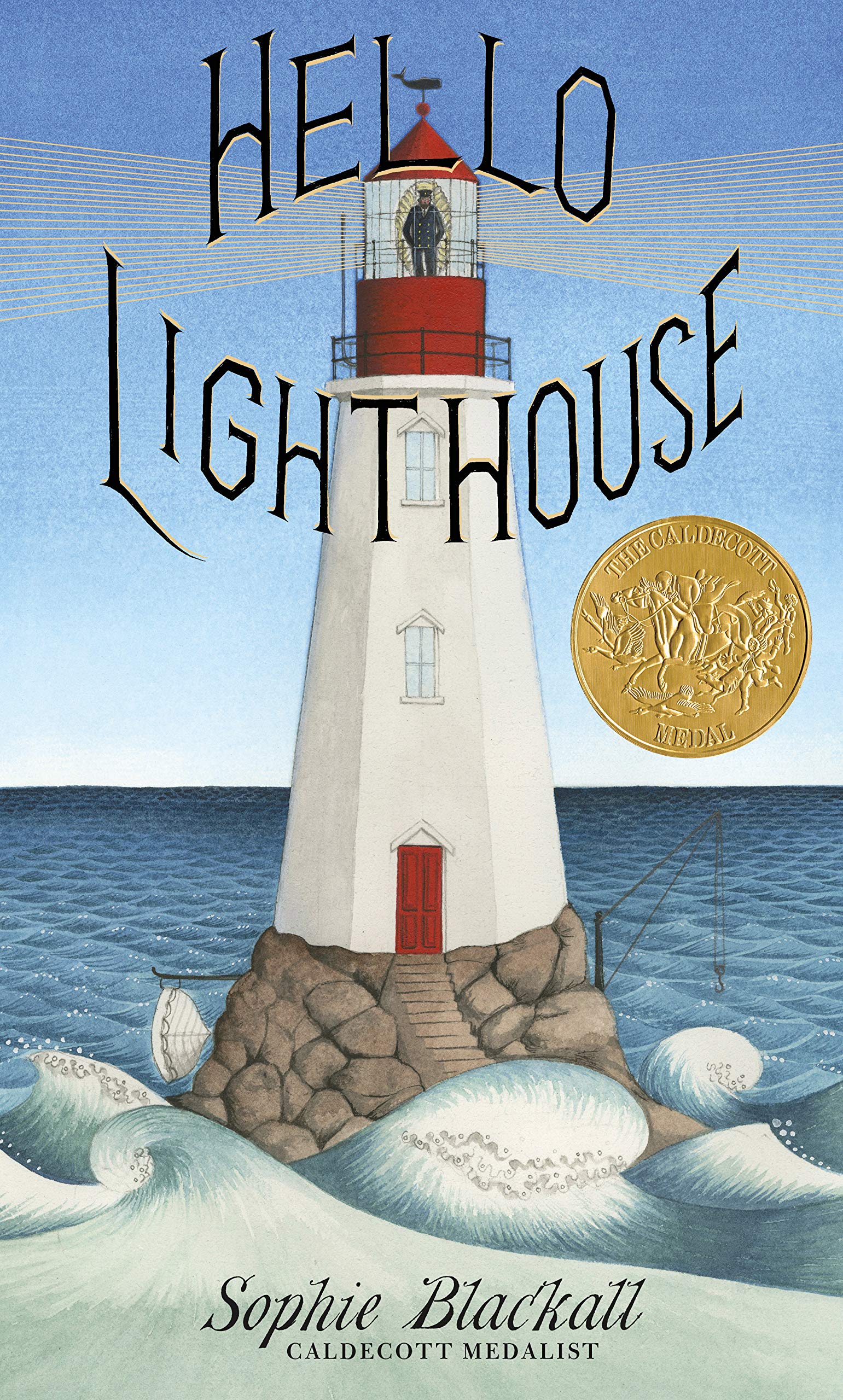 This book and the former not only share exceptionally beautiful artwork and letters delivered via bottles in the ocean, but also (almost) the same whale-shaped weather-vane! Talk about niche. I’ve had this book in my curated huddle of favourites for some time now; it’s a treasure of a tale with a good deal of historical interest. Blackall was inspired by a drawing of a lighthouse spotted one day at a flea market; it was an image of the inside, as if the lighthouse was cut in half dollhouse-style. She had never before considered the real person who would have lived inside these beacons of light and set off on an extensive and immersive research experience, travelling everywhere from New York to Newfoundland to explore lighthouses and to learn about the people who once lived in them. That bright spark of sincere interest in her subject really shines through in the finished book; we get an up-close and personal story about one lighthouse keeper and his adventures, and somehow in the process also capture a glimpse of something more than this one keeper and his one station. School Library Journal deems it “A lovely picture book, recommended for all libraries. A delightful bedtime read perfect for one on one sharing.” I can attest to these assertions. Hello Lighthouse is a pleasure to pour over together. 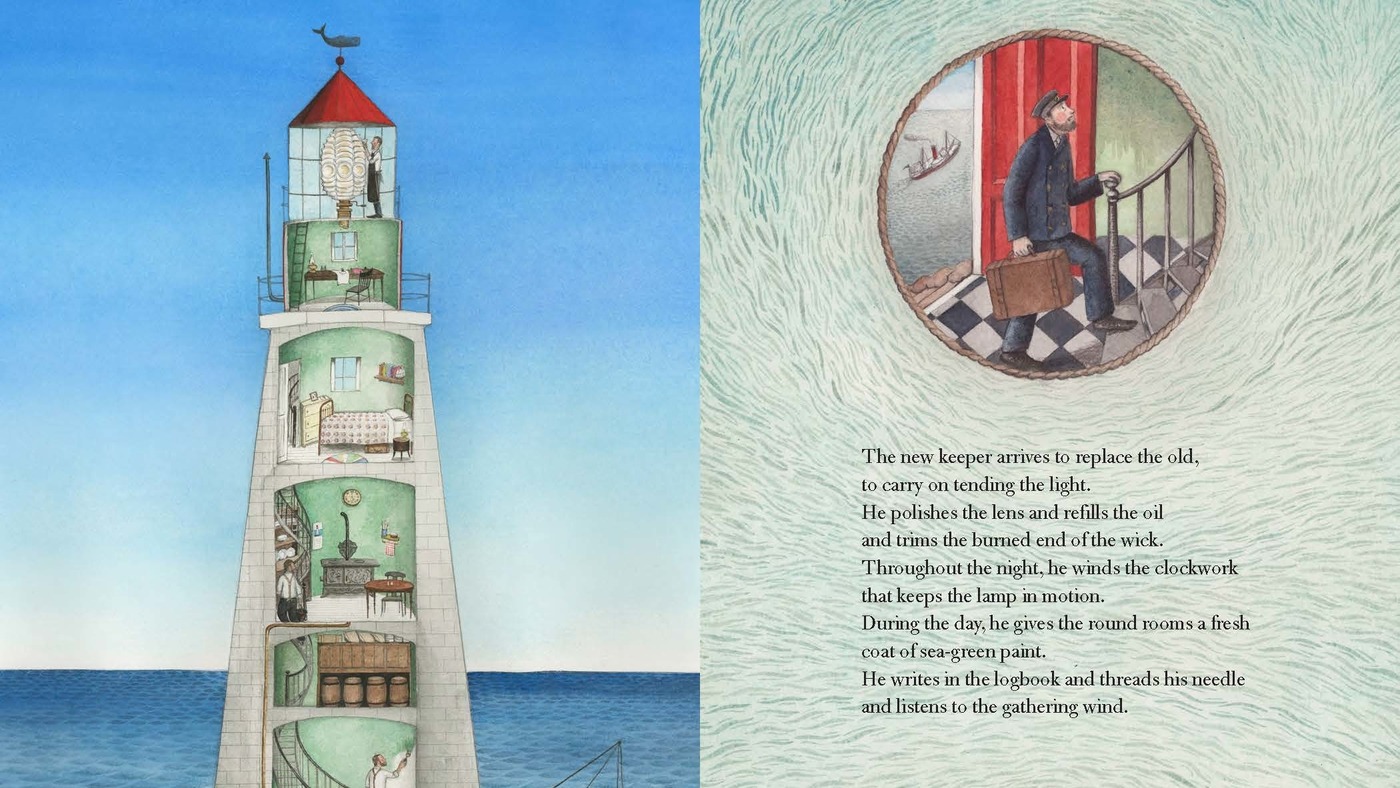 See You Next Year

Andrew Larsen was born in Montréal and spent the golden days of his childhood there, moving to Toronto at the age of 12. He has authored some pretty great picture books, including Goodnight, Hockey Fans (a friendly narrative that is right on point for imaginative young hockey enthusiasts) and See You Next Year (the story of one child’s family tradition of driving to the beach for a week-long getaway every year). Larsen’s writing style reminds me somewhat of Miyazaki-style filmmaking, and perhaps a little of my all-time favorite movie, Amélie; he recognizes the beauty of the unassuming detail and chooses to be expressive about the small things. This quality of noticing—really noticing—small and beautiful things seems to carry through a good many of his works. In addition to being another waterside-themed book, See You Next Year has a letter-writing component in it as well! A postcard that the protagonist can send to anyone. Anyone. The last time three books fell so neatly into categorical place was when I was reading books about taking a walk in the city at nighttime: you can read about it here. Elizabeth Gilbert asserts that sometimes ideas are just ‘in the air’ and may come to call on many artists all at once: “the artistic version of multiple discovery—a term used in the scientific community whenever two or more scientists in different parts of the world come up with the same idea at the same time (calculus, oxygen, black holes, the Möbius strip, the existence of the stratosphere, and the theory of evolution—to name just a few).” Note that all three of the titles discussed were released within four years of each other. Farkas Bolyai described it this way; “When the time is ripe for certain things, they appear at different places, in the manner of violets coming to light in early spring.” Such a beautiful thought.

And there you have it! Three waterside tales for the letter-writing enthusiast (with the dynamic between isolation/ separation and togetherness being another shared thread, I noticed).

Have you ever fallen into a wonderfully specific reading niche? What was it? Is there still a place in the world for letter writing?

2 thoughts on “An Animal that Writes Letters”