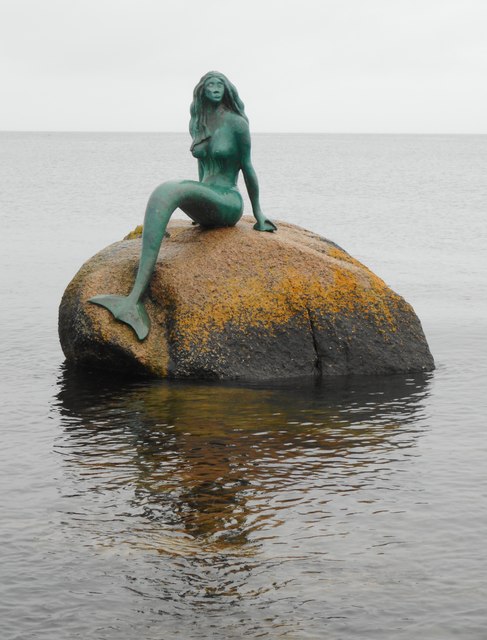 As Willy Wonka cribbed from Arthur O’Shaughnessy, “We are the music makers, we are the dreamers of the dreams,” and it is interesting to note the motifs that arise over time, particularly in stories. As Martine Mussies observes, “The exploration of the recreation of myths gives us valuable insights in the complexities of human interactions… It creates a sense of continuity in societies, across generations, using the past as a foundation on which to build a better, or at least more ‘authentic’ and relevant, understanding of the present and future. The influences that shape fantastic beings like mermaids tell us so much about what it means to be human”. Mermaids have been a persistent fixture in folklore the world over for centuries and continue to appear in

contemporary fiction. Plenty of merfolk besides the mermaid ‘exist’, “these include not only the mermen, but such creatures of the imagination as the seal-folk and the water horse or kelpie,” but mermaids seem to have won a special place on the narrative stage. Even still, it can be easy to treat such creatures of fantasy trivially; they are the stuff of glittery merchandise and 5-year-olds’ birthday parties, but I think this surface observation can be deceiving. Even the most whimsical of storytelling may have something worthwhile to share, and this sentiment is described beautifully in an interview with Neil Gaiman for World Refugee Day 2014. He talks about his cousin, Helen, who survived the Warsaw ghetto in World War II; “She actually told me a story that made me realize that what I do is not trivial, because if you make stuff up for a living—which is basically what I do—you feel kind of trivial.” His cousin, Helen, had started teaching mathematics and grammar to the girls in the ghetto during the day:

“And at that point, you had a death sentence for possessing a book—books were illegal—but she had a Polish translation of Gone with the Wind that was slipped to her and she would keep it behind a loose brick in the wall and stay up late every night reading Gone with the Wind so that when the girls came in the next day, she could tell them what happened in the chapters she read that night. And just for that hour, they got out of the Warsaw ghetto… and I thought that actually changes everything: the idea that it’s not just escapism, it can actually be escape and it’s worth dying for.”

I think that stories have much more to tell that what is present at face value; storytelling is our shared human heritage and in a lot of ways, it makes us who we are. And while not everything can be a literary masterpiece or worthy of special merit, stories count, even those that take on a lighter—perhaps humbler—form.

Splash is a fantasy-romance revolving mainly around a mermaid who comes to New York City in human form. It was released in 1984 and in contrast to anything Orwellian, it is decidedly the ‘spoonful of sugar’ rather than the medicine. The movie is many things: a nod to Hans Christian Anderson’s The Little Mermaid and mermaid folklore everywhere, a playful not-so-distant cousin to Guillermo Del Toro’s The Shape of Water, and basically the queen of all reasons to suspend disbelief now and then. In reference to Ron Howard’s role as director of the film, Tom Hanks mused that “In lesser hands, a movie about a mermaid is just a kooky, kind-of fake movie and in a weird way, Splash is not a fake movie.” I had thought of it simply as a pleasant, rather amusing piece of storytelling, but it turns out that the film lays claim to some small historical interest as well:

It would be a galling omission not to mention the actor who plays Madison, Daryl Hannah; Hannah was not only able to act underwater for an impressive span each shot, but from years of practice in childhood, she also had the athletic chops required for the (fabulously specific) skill of swimming ‘mermaid-style’. This was discovered during the auditions for a mermaid stunt double—Hannah outdid them all and the decision was made not to hire one. Critics were also careful to note that, “the film would not be nearly so successful without the bulldozing presence of John Candy” (Candy plays the big-hearted, blowhard brother), and indeed it was a treat to see the Canadian actor on screen. While many have praised his comedic role, I was personally the most pleased with his surprising (and wise) brotherly advice near to the end of the film. Splash stars Tom Hanks, Daryl Hannah, John Candy, and Eugene Levy.

Go, and catch a falling star,

Get with child a mandrake root,

Tell me, where all past years are,

​Or who cleft the Devil’s foot,

Teach me to hear mermaids singing,

Or to keep off envy’s stinging,

Serves to advance an honest mind.

2 thoughts on “Making a Splash”