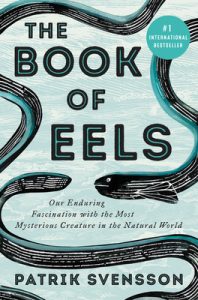 No one has ever seen an eel in the Sargasso Sea.

Aristotle thought they spontaneously generated out of mud. Freud – yes, Sigmund himself – dissected 400 eels attempting to locate the eel’s male reproductive organs, before becoming the father of psychoanalysis. (He failed.) Johannes Schmidt, the man who is credited with finding the birthplace of the eel (for good reason), spent almost two decades looking at tiny baby eels (resembling tiny willow leaves) under a microscope, trawling the sea, before concluding that they likely breed in the Sargasso Sea. Shortly after he published his results and was awarded the Darwin Medal by the Royal Society of London, he died of the flu.

Undulating smoothly from chapter to chapter between memories that seem to shift as Svensson recounts them, their accuracy less important than what is recounted and what import they hold for Svensson himself, and historical tidbits about the history of scientific investigation into the eel and the many ways in which, despite our efforts, the eel has continued to elude us. Svensson is clearly fascinated by this creature, Anguilla anguilla, and his recounting of his memories of his father, the two of them finding common ground in the eel, is incredibly tender.

Something I really enjoyed was the complete deadpan in certain sections, the cheeky remarks here and there. How despite presenting the evidence for believing in certain information about the eel – where they reproduce, for example – Svensson still maintains that distance, the remove from objectivity and certainty. And in particular the eel as it is reflected in Leviticus: “These you may eat, of all that are in the waters. Everything in the waters that has fins and scales, whether in the seas or in the rivers, you may eat. But anything in the seas or the rivers that has not find and scales, of the swarming creatures in the waters and of the living creatures that are in the waters, is detestable to you. You shall regard them as detestable; you shall not eat any of their flesh, and you shall detest their carcasses. Everything in the waters that has not fins and scales is detestable to you” (c.11: The Uncanny Eel), to which Svensson: “What God apparently  means to say, assuming the word choices and repetitions are correctly interpreted, is that fish and other aquatic animals without fins and scales are abhorrent… Now this is all a misunderstanding, of course… the eel has both fins and scales… But it is a misunderstanding that shows that when it comes to eels, not only are science and the eel itself suspect, you can’t trust God either” (c.11).

Even as we come to a close, Svensson cannot definitively state one thing or another about the eel, apart from its elusiveness, and he is painfully aware that while this mystery is what draws people to the eel, it is also contributing to its demise:

It is, if you will, a classic catch-22: Those of us who want to protect the eel in order to preserve something genuinely mysterious and enigmatic in a world of enlightenment will, in some ways, lose no matter how things turn out. Anyone who feels an eel should be allowed to remain an eel can no longer afford the luxury of also letting it remain a mystery. (c.17: The Eel on the Brink of Extinction)

Even if you have zero interest in eels going into reading The Book of Eels, I assure you, you will come out having traversed a magical ocean adventure highlighting some of the ways in which humans have been thwarted by nature.

For similar reads, check out some of these titles: