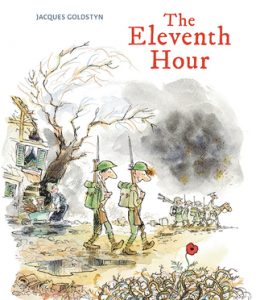 Jacques Goldstyn, author of Letters to a Prisoner and Bertolt, takes us through a story based on real events (Jim is based on George Lawrence Price, a Nova-Scotian soldier who died in WWI at 10:58am, hours after the armistice was signed but just minutes before it was announced and ended the war). In The Eleventh Hour, Jules and Jim were born within minutes of each other – Jules 2 minutes after Jim – and they grew up inseparable, with Jules always 2 minutes after Jim. As the war begins and the two boys join the army, Goldstyn doesn’t shy away from portraying some of the dark grisly circumstances that come with the warfront, from mice and lice to a fiery red explosion complete with those caught in its wake. On November 11, Jim once more goes ahead of Jules, up and over the trench – only to be shot down – with Jules, following 2 minutes behind Jim, surviving the war. One of the things that really stuck with me after reading this title was how Goldstyn highlights the absurdity of the situation: he shows the signing of the armistice, which happened hours before 11 o’clock, forcing the reader to be confronted with the meaninglessness of Jim’s death. But where this message truly shines, I think, is that in making the reader question the meaning of Jim’s death, it also brings up the question of the meaning of war. 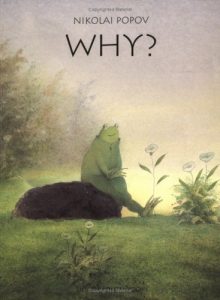 Here are a couple more recommendations for picture books, to introduce the topic and bring up discussion, for all ages: Why? by Nikolai Popov, which I’ve written about before, and Once a Shepherd by Glenda Millard & Phil Lesnie (also previously reviewed).