END_OF_DOCUMENT_TOKEN_TO_BE_REPLACED

In her book, Happier at Home, Gretchen Rubin writes about suddenly discovering her own decades-long love of miniatures (dollhouse furniture, tiny sculptures and scenes, etcetera), describing that knowing herself better, even in this small way (pun intended), lent itself to greater happiness. Steve Jobs credits tuning into his own seemingly-unimportant interest in a college calligraphy class to his eventual success with the typography of Macintosh computers and according to Helen Russell (author of The Year of Living Danishly), Danes credit some of their famed happiness to ascribing less import to a career’s salary and more to how interesting the job is to the individual. The creator of SpongeBob SquarePants, Steven Hillenburg, had a childhood fascination with the ocean and with visual arts; he was a marine biology teacher interested in working with children before eventually dreaming up the famous (and bracingly optimistic) sponge. It seems to me that wherever they may mysteriously come from, our interests are worth noticing. They are not always the all-encompassing ones that will come to define our time here on the planet, but I think that even the little ones are of value. This is a small, krill-sized interest that I uncovered from an unassuming stack of books (my home is filled with stacks of books, I’m pretty sure it’s my primary decorating aesthetic). If you’ve ever found yourself in your own thematic reading nook, you’ll know that it can be good fun and I especially like that this one crept up on me without any special design on my part—I just looked down at my desk one day and saw a small pile of books that (it suddenly occurred to me) belonged together.

The Uncorker of Ocean Bottles

Written by Michelle Cuevas and Illustrated by Erin E. Stead

I admit, it was the artwork that got me with this one. I know that you’re not supposed to judge a book based on appearances and I think there’s some truth to that, but I’ve also found some great books this way, so who’s to say? I think the spirit of the expression ‘not to judge a book by its cover’ may have more to do with not missing out on those magical few that defy us with their underwhelming outward forms—they are out there and are absolutely worth seeking. With its charming character representations, delicate lines, and soft colours, however, The Uncorker of Ocean Bottles does not fall into this elusive category. In the book, our hero faithfully delivers the letters that arrive in from the ocean, but secretly—not especially optimistically—he wishes that someone would write a letter to him. It reminds me a lot of the fifth and final story in Frog and Toad are Friends (a fantastic book for newer readers): Toad sits and waits for the mail every day (it is his ‘sad time of the day’ because he never gets any mail) until one day Frog has an idea that will make Toad feel better. As Cuevas writes, “a letter can hold the treasure of a clam-hugged pearl,” and I think that like birthday cakes, snowmen, and bedtime stories, handwritten letters are a custom worth keeping around a while longer. .

END_OF_DOCUMENT_TOKEN_TO_BE_REPLACED 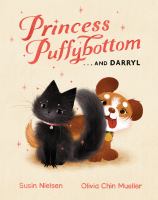 As someone who reads any book about cats that she comes across, whether fiction or non-fiction, for children or for adults, there are some that are extra special and Princess Puffybottom – And Darryl by Susin Nielsen is one of them. The story is about a cat who is Princess of her domain but is dismayed by the addition of a puppy to her kingdom. The puppy is messy and uncouth but worst of all he takes attention away from the Princess. Princess Puffybottom knows that this intruder needs to be banished somewhere far faraway. She tries everything to do that including hypnosis, trickery and sabotage but nothing works – it looks like Darryl is there to stay. Princess Puffybottom is sad but no one even notices – except Darryl. Slowly the Princess learns that Darryl has some redeeming features. He worships her, puts her on a pedestal (literally!) and even helps her get extra food. Princess Puffybottom comes to understand that there is room for both a Princess and a companion in her kingdom and life is good again. But what is that, that her human subjects are bringing home on the last page?