In July, uber-cool film studio A24 released The Green Knight in theatres, but with the new school year starting and sweater weather approaching, I feel there’s no better time to delve into an old Arthurian legend than autumn (except maybe Christmas, when the story takes place). If you haven’t seen the film, it is an adaptation of an anonymously-penned chivalric romance from Medieval England about Sir Gawain (one the famed Knights of the Round Table). And if you have seen the film, you’re probably like, “what in the world did I just watch?”

Arthurian legends in media are in no short supply. We all at least vaguely know the names King Arthur, Guinevere, Lancelot, and Excalibur, right? You might have seen Disney’s The Sword in the Stone as a child (featuring, iconically, a Converse-wearing Merlin), or maybe the old parody staple, Monty Python and the Holy Grail (“Strange women lying in ponds distributing swords is no basis for a system of government”). More recently, there was BBC’s Merlin, in which the titular wizard is a young man when he befriends the weirdly jock-like Arthur (cue shipping). Historically, the old tales have been interpreted in countless paintings as well (you might recognize this one especially, of Elaine of Astolat, harboring an unrequited love for Lancelot). No matter the version, they’re always recognizable as being Arthurian. The departure from that recognition, from the usual tropes, names, and places, is what makes The Green Knight such a bizarre, and modern, take.

END_OF_DOCUMENT_TOKEN_TO_BE_REPLACED

Do you love discussing movies? Then join us monthly at our Film Talks program! We’ll watch films, chat with viewers, and host some special guests!

2021 marks the 20th anniversary of Moulin Rouge and the 25th anniversary of Romeo + Juliet, two absolute bangers brought to us by the visionary that is Baz Luhrmann. You’d be hard-pressed to find a more polarizing director. You can love him, or you can hate him, but you’ll never sway the other team to your side. Luhrmann’s style can generally be described as maximalist—but that wouldn’t truly do it credit. It’s maximalism at the top end of the gauge. It’s maximalism on every party drug known to man. It’s fireworks and swirling colour and dizzying camera cuts, for no other purpose than to throw you off your balance and to pitch you head-long into a world of high camp, high energy, high drama—just high, to be perfectly honest. Luhrmann looks at maximalism and says, “sure, more is more. But most is best.”

As a viewer, you either eat up the spectacle or you throw it away; you’ll notice that both positive and negative reviews use the same language to describe his work, and it’s up to you how to feel about it. Are you seduced by the “tour de force of artifice, [the] dazzling pastiche of musical and visual elements” (a positive review) or put off by the “Gorgeously decadent, massively contrived, and gloriously superficial” ones (a negative review)? One thing is for sure: you will have a strong emotional reaction either way. You don’t just watch a Baz Luhrmann film. You need to strap in and prepare for whiplash, because he is about to assault all five of your senses and maybe a sixth.

But to reduce Luhrmann’s work to artifice and superficiality would be to miss the point. Yes, his films are a love letter to excess, and bring new heights to the term “chewing the scenery”. Yes, aesthetics are front and centre. But Luhrmann uses all these tools—and, truly, every tool in his belt—to get to the truth of the matter: he can laser-focus on an emotion or a theme, and then yank on it until it’s at the surface in its most raw form. The heightened artifice brings it out. Take Moulin Rouge, for example. The film high-kicked its way into theatres in June 2001, following a decade marked by too-cool-for-you-irony (and just before the gravity of 9/11). It’s a fin de siècle burlesque jukebox musical about a penniless writer (played by Ewan McGregor) and a high-end courtesan (Nicole Kidman) who fall in love at the titular cancan venue. It’s a film whose theatrical climax features a man growling a tango version of “Roxanne” by The Police. The two main characters fall in love over the course of one mishmashed pop song—maybe two, if we’re being generous. Kylie Minogue has a cameo as “The Green Fairy”, a hallucination brought on by absinthe. The villain is simply named The Duke (but you have to say it dramatically: The Djuuke) and he performs an extended, silly version of Madonna’s “Like a Virgin”.

END_OF_DOCUMENT_TOKEN_TO_BE_REPLACED 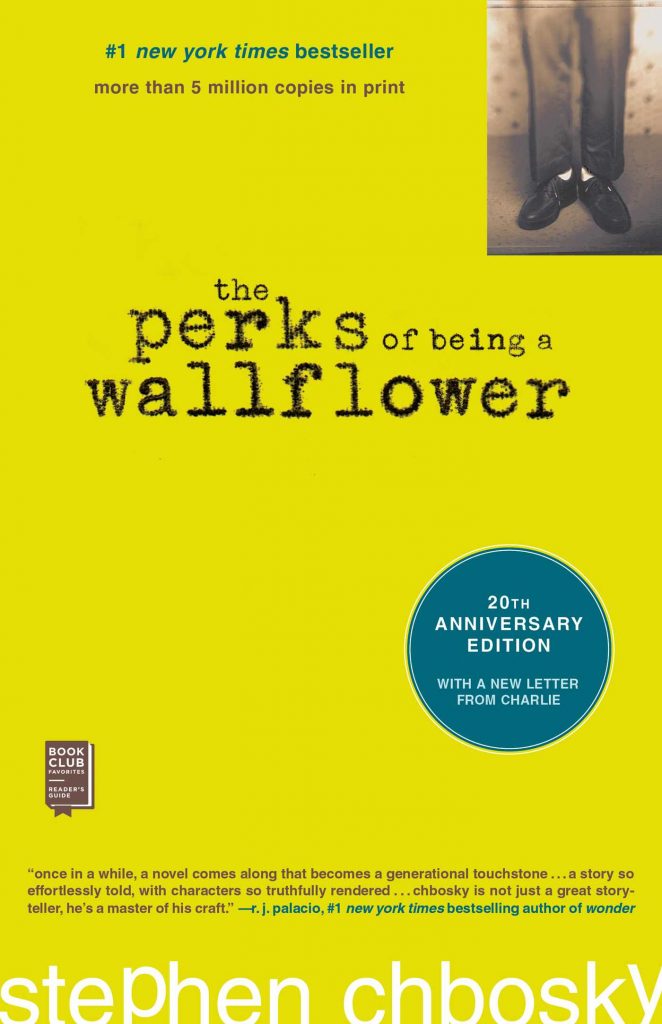 It seems that no matter how old you get, and how removed from school you are, September always feels like a new beginning—a fresh start of sorts, a promise of exciting new possibilities. That newly crisp chill in the air says “new year, new me” way more than New Year’s Day, when I’m typically lying on the couch with a headache and regrets. It’s a time for new shoes, new clothes, new stationary supplies. At the same time, I return to hallowed fall rituals, like rewatching Gilmore Girls and baking apple crisps. One of my more personal traditions is re-reading the YA classic The Perks of Being a Wallflower, which to me is the embodiment of autumn-tinged nostalgia; a blend of looking back in fondness and looking forward in anticipation. Usually, I feel inspired and emotionally fortified by this re–read. But this year, it went a little differently.

The Perks of Being a Wallflower celebrated its 20th anniversary last year, published in 1999 by MTV Books at a time when MTV was still an important part of youth culture (Daria was still on the air at this point, very formative for little me). The plot is simple: Charlie is a high school freshman coming out of a dark period, who vows to turn his life around in high school by really living. Quickly making friends with seniors Sam and Patrick, Charlie’s first year of high school is an emotional ride full of love and trauma. The book is told in epistolary format, entirely composed of Charlie’s letters to a mysterious “you.” Who he is writing to is never made clear, nor does it matter. Since 2004, Perks has made scattered appearances on America’s Top 10 Most Challenged Books Lists for a bevy of typical reasons, namely “drugs/alcohol/smoking, homosexuality, offensive language, sexually explicit, unsuited for age group.” This doesn’t even mention the exploration of mental illness and suicide. So basically, all the things that would attract young readers trying to figure out the world and their place in it.

The beautiful thing about this book is that it ages well. It’s situated in the early 90s, but it’s vague enough in period details and honest enough in its humanity that it appears timeless (well, except for the mixtapes, but who doesn’t love a mixtape?). For younger readers, Perks is like a warm, reassuring hand, guiding them through the most confusing and sometimes the most difficult years of their lives. For adults, it can be just as powerful; like holding in your hands a physical manifestation of memory. I didn’t read the book until my university years, and it still hit me like a truck. Though Charlie is technically only 15 by the book’s end, he has the wisdom of a much older, highly observant adult. “This moment will just be another story someday,” he says, commenting on a football player who just scored a touchdown, and later, “Maybe it’s sad that these are now memories. And maybe it’s not sad.”