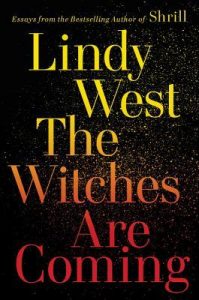 So fine, if you insist. This is a witch hunt. We’re witches, and we’re hunting you. (The Witches are Coming: Introduction)

Let’s start off with this energy.*

Which is a bit of a step up from Shrill just 3 years ago. The same type of humour is there – to be perfectly honest, not the style I usually go for, but West makes many a good point – but I have to say, it’s pretty clear what’s changed in her writing (though there is also plenty that has not): West is noticeably more exasperated (perhaps because things have not improved since she wrote the essays from Shrill?); angrier, that she’s writing this at all (as she notes in her chapter on internet trolls: “I keep vowing to never write about internet trolls again, but unfortunately my country’s… ignoring the screams of the marginalized has made internet trolls not just culturally relevant or politically relevant but historically relevant. So here I am – one more troll chapter” (Leave Hell to the Devils); one hopes this is the last troll chapter West will have to write). The Witches are Coming is like Shrill’s more cynical, jaded cousin. So of course, in many ways, I loved it.