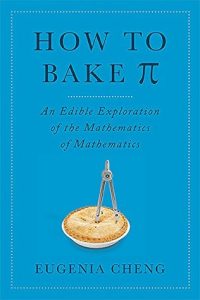 I know basically every celebration of pi day (March 14, because pi = 3.14…) turns into a celebration of pie, and I’d never say no to pie, but what if we could celebrate with delicious pies while also learning more about what math is at the same time? Conveniently enough, Eugenia Cheng, author of  X + Y, has already done this for us:  How to Bake π.

Now, I’m going to take a bit of a detour away from tasty delicious pie and into the world of knitting for a brief moment. Upon asking a college classroom what came to mind when asked about mathematics, math professor Sara Jensen found the top two words were “calculation” and “equation”. Asked the same question, professional mathematicians gave quite a different response: “critical thinking” and “problem-solving”. Which prompted Jensen to “eliminate pencil, paper, calculator (gasp) and textbook from the classroom completely. Instead, we talked, used our hands, drew pictures… And of course, we knit” (Jensen, Why I Teach Math Through Knitting), in an attempt to bridge the gap between how students approached math (calculating equations, memorizing proofs…drudgery) and how math could actually be used as a tool, engaging learners by making the learning interesting and more hands-on. I’ve joked before about how I’ve done more linear algebra while knitting than learning it in class, and certainly with more of a vested interest in how the abstract numbers translate to the physical object! And I’ve also thanked Pythagoras before for imparting his theorem to us while figuring out how to calculate length as I knit on a bias. In fact, I have found myself wanting to engage more with math as I knitted more and more, making alterations and designing my own items – it’s all the same math I learned by rote back in school, approached with a lot more enthusiasm now in comparison, and willingly at that!

And it’s exactly this work of transforming how we think of math, from equations and calculations to problem-solving and critical thinking, that Cheng does in How to Bake Pi. She makes math fun to learn, and accessible to audiences of varying levels of math knowledge, which is quite a feat! 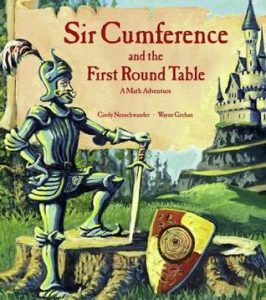 Speaking of making math fun and accessible for all ages, here’s a great picture book series with punny titles that introduces various concepts to children: Sir Cumference! I read Sir Cumferene and the Dragon of Pi: A Math Adventure, where Sir Cumference has been transformed into a dragon and only his son, Radius, can save him by solving a riddle that will help him make the cure. It’s certainly an adventure, and I enjoyed seeing the various ways in which Radius got his clues before being able to approximate pi, one of the aids being, of course, pie.

Which leads us to… here’s the content you actually came for: PIE. (Though if we go by the Cube Rule*, much of what we consider Pie is actually something else entirely… what does it matter though? A rose by any other name would smell as sweet, after all.) 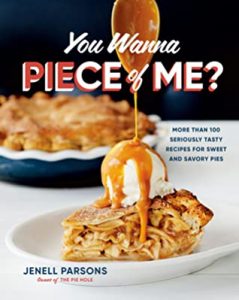 Tired of the classic butter pie crust and feeling a bit fancy? You Wanna Piece of Me? has you covered with the regular double butter crust, a vegan crust, and about a gazillion variations on the pressed crust, from classic graham cracker to Candy Bar Pie Crust (????) and the Nanaimo Bar Crust (!!!!). These are followed with step-by-step instructions complete with photographs to lead the way and extra tips & tricks to make sure your pie crusts come out just as flakey as pictured.

Parsons also goes beyond simply sweet pies and plunges into savoury, with offerings like Korean Pork Handpies, Swedish Meatball Pie, Salmon Bacon Chowder Pie – sign me up! – and much, much more. 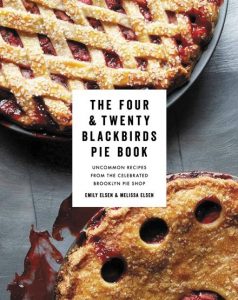 Four & Twenty Blackbirds Pie Book by Emily Elsen is my go-to pie crust recipe! I love the description of making the pie crust using your hands to crumble the butter into the flour mixture, making the money gesture. The salty honey pie is also a crowd-pleaser despite the intensity of the sweetness – or perhaps exactly because of it? Perfect for beginners, pie connoisseurs, and everyone in between, this pie crust if nothing else has never let me down!

You can also check out Art of the Pie by Kate McDermott, which is available as a physical book and an e-book on Overdrive, or Sister Pie by Lisa Ludwinski. Or if you’re ready to take your pie game to the next level, there’s also Pieometry, available through Markham Public Library’s Overdrive using your VPL library card! 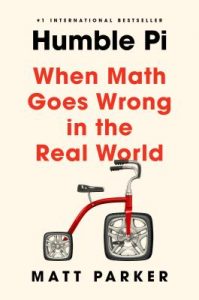 And if you’re having trouble with your pies coming out too soggy (been there!), too liquid a filling (that sad, sad feeling of oozing disappointment…), underbaked (read your pie, not the times in the book! Those are there for reference, not a rule!), overbaked (I feel for you), and whatever else may befall a pie (there is much), it might be time to turn to pi instead and take a quick break from the pie-making process. And for this, too, we’ve also got you covered! Check out Humble Pi: When Math Goes Wrong in the Real World by Matt Parker, or perhaps Weird Math: A Teenage Genius and His Teacher Reveal the Strange Connections Between Math and Everyday Life by David J. Darling.

How are you celebrating Pi Day this year? Will it be with pie, or will you go out on a math adventure as Sir Cumference does and learn more about math and its applications in everyday life?