Have you been stuck at home, social distancing from people, when you come to realize that your space is crammed with stuff? Is there a lingering feeling that your surroundings are breaching your space? Are you overwhelmed with an abundance of thoughts that leads to a lack of focus? Perhaps you’ve never really paid attention to your living space until now because of time, energy or alternative priorities? Since a lot of us are confined to our homes for the next little while, you might have become more conscious of how many things you own. You might have also noticed how much money you are saving now that most shops are closed! Our self-isolation has a positive side: we have ample time to reconsider our daily lives and the actions that we might not have scrutinized before because of a distracting and consuming world we inhabit. Since life has slowed down considerably, and in perfect time for spring cleaning, now is a good time to explore why I became a minimalist and why you might want to flirt with the idea too.

Minimalism has a long history that entails art, philosophy, and religion, but for our sake, I’m referring to minimalism as the cultural practice of owning less. Minimalism has been in the zeitgeist for a couple of years now: the centripedal force that has drawn in most to this cultural explosion is cleaning guru Marie Kondo. Her best-selling books—that we have on Hoopla and Overdrive—as well as her Netflix show have solidified her presence in many people’s (cleaner) lives. I first started on my minimalist journey in the summer of 2017 when I read the Life Changing Magic of Tidying Up after a patron called the library and ask me to put it on hold for them. I’ve been collecting video games (I had over 500) and books (I had 7 book shelves) for years. However, even in the fleeting ecstasy of obtaining a new game or book, I always had a nagging feeling that I’d never hit the end point of satisfaction: an event horizon that was always buried by the increasingly growing pile of unplayed games and unread books. Her methodology promotes keeping only things that “spark joy” in your life. I devoured her debut book in a day and then that weekend I went through my possessions, in “KonMari” style, and excised two giant bags of recycling (why was I keeping boxes for stuff that I bought?!) and one large bag of clothes for donation. I finally honed my “spark joy” radar!

I felt freer, but also became zealous in my new obsession of being “free.” Being the librarian I am, though, I disagreed with her assertion that you should only own 30 books—that was blasphemy in the literary world I was a part of. I couldn’t get rid of any of my games either or I’d be an “inauthentic gamer” and admit that that time and money was wasteful. Of course, these were excuses I was telling myself for the underlying issu

es: I wanted these books because they represented the growth of my intellectual life and my collection of games were a reflection of my the history of playing with friends and going on solo adventures. This mindset, however, over years, dissipated as I realize my identity was intimately and unhealthily tied up in physical possessions: who cared how many books I owned, more importantly, what ideas from books have I acted upon, changed my life or helped change the lives of others? Over the last 3 years, I’ve whittled down my physical game collection from 500 games to 3 (I own some digitally) and 7 bookshelves to 1 (I have more than 30, but each one is precious)! This weeding process became addictive: I got a dopamine hit from transforming what I now felt as “burdensome” material objects into cash; cash I could use to spend time with others or save. This shedding process was even more satisfying after realizing I was spending a lot of time organizing, cleaning and thinking about these collections: I leave this type of work for the public’s good at the library now. I did come upon speed bumps—I couldn’t get rid of all my clothes without wearing the same thing to the library everyday!—and I still wanted to read and enjoy games, but the relationship with those things changed as I shifted from owning the objects (or do they own you?) to focusing on experiencing the ideas captured in art and letting the materiality go when necessary for others to enjoy. The most profound transformation, then, was engaging in a dialectical process between my self-image and the outside world; “sparking joy” was the prism that worked best for me to have these internal conversations and has since evolved outside of her catchy method.  Kondo’s  first book remains, ironically, one of the few physical books I’ve kept as an effigy to my past life and a reminder of the process of striving for more (with less).

Once I read her other books, including Spark Joy, I ventured out to all minimalist books and videos I could consume. I fell upon Goodbye, Things—available on Hoopla and Overdrive—a Japanese “extreme” minimalist who owns less than 30 objects. This was an especially fun book to read when I was already open to minimalism, but not in the mindset to rid all my worldly possessions. It is a great rumination on how our possessions posses us and set distinct limitations on our imaginations. I then read and watched on Youtube the American duo “The Minimalists.” Their insights into how living the American dream—making 6 figures salaries yet having more debt than they could manage—was exactly that: a dream that we needed to wake up from. The pair echo a lot of one of the original American minimalist’s mantras found in Henry David Thoreau’s Walden with a modern flare: their most poignant mantra is “love people and use things because the opposite never works.”  Similarly, I fell upon another Youtuber who describes herself as an extreme minimalist—Heal Your Living—who explicitly connects how our consumption affects others, the environment and our perception. Taking a Buddhist approach to minimalism, the Heal Your Living channel is an abundance of life lessons on how to thrive with less and open oneself to the spiritual liberty of a clearer consciousness and to treasure what you already have. After months of delving into this world I had to ask myself: how do I partition my time (and energy) according to my loved ones, myself, and work such that they cohesively intermingled. Minimalism had forced me into this process of looking internally for a clearer direction as I focus on cultivating an intentional life.

There is, however, a strong criticism to minimalism as a lifestyle: it heavily relies on the person’s transformative epiphany to come from a place of abundance—it is a privileged position to strive for less when so many struggle to have the basics, let alone more.  Minimalism is an aesthetically self-imposed lifestyle—or a stark fiscal reality for some—of less. It does not fully address the underlying consumer culture that we are implicated in; merely, it can be seen as another cultural reaction to late capitalism. Commodifying every subversive cultural trend and selling it back to you is nothing new in capitalism. Sadly, the KonMari method can ring inauthentic when the sage of minimalism set up an online shop where you can purchase an ostensive laundry basket for $208. Indeed, minimalism never looked needier when it cries out to spend money to obtain an aesthetic of less. A cynical, if not accurate, view of minimalism as a cultural practice can be the forcing of austerity onto the atomized individual to make sparking joy an individual action—distracting the population on the macro political economy. People are trying to compensate for the increasing gulf between the haves and have nots by pretending to not care about material things.

On the other hand, figures like Vicki Robin strive for the individual to become more conscious of what your money decisions represent:  everything you buy is the process of you trading in your time—what she calls “life energy” or what Marx identified with the process of creating surplus value from variable labour—into money. Whether you are the CEO of an S&P 500 company or a child earning an allowance, we are all literally trading in our time, energy and conscious effort for money. As such, what you do with that money should be an incredibly diligent practice since you have a finite amount of time on earth. This is a more accurate representation of how minimalism is an ethical praxis.

Conversely, even after getting rid of things and honing what you really need, the constant state of wanting persists. When getting rid of things, people often feel at once liberated and simultaneously empty: an empty bowl, as Lao Tzu asserts, is most useful; and yet, the emptiness of the bowl makes one crave to fill it with something useful or joyful. For me, I found the emptiness as a symptom of relying on external commodities for identity: buying brand name clothes to show I was “with it,” relying on a possession to impress people, hoarding books to show how smart I am. Instead, I find more contentment with letting go and recognizing that the corporeality of objects hold us back financially, physically, and spiritually. Less consumerism—in all its forms—creates a larger space for me to connect to other people, nature, and myself more profoundly. The reduction of friction between me and the actual world—by reducing the noise and distractions from my meta-life that consumed me—provided me with a clear sense of priorities. I was, and still am, conscientiously discovering my values. This was only the beginning.

When this realization came, that the physical objects in my life have little bearing on my identity or satisfactions—and worst still, to be define by how many things I own was emptying and expensive—I began striving for something more meaningful. More fun conversations with loved ones, learning to cook more, exercising consistently, and enjoying the simplest pleasures of life (e.g. the fresh brisk air that tickles my nose on a spry afternoon walk or cold water with a squeeze of lemon). Slowly but surely minimalism led to other transformations and I began living in sympatico with myself and my surroundings—as figures like Epicurus, Confucius and the Stoics had. Minimalism, for m 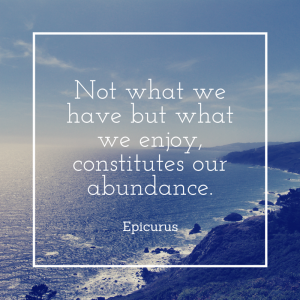 e, has become a constant tool—a litmus test—for a clearer and more prosperous intentional life. This intentionality is a process, one that evolves over a lifetime, which I’ve retooled for the last 3 years, and will continue to evolve with. Some people find that significantly reducing their possessions as revelatory, others find it impractical. Minimalism is a means, not an end, and should thusly take its unique form according to your needs. It took me 3 years to appreciate that I already own millions of books: I even get paid to look after them and I have the cathartic joy of sharing those books and ideas with everyone in our neighbourhood (i.e. the public library). So, too, can I access an unlimited amount of games via the library. It is here that minimalism is most precious: minimalism puts more onus on the cultural institutions that support a society (e.g. libraries, parks, social services) and shifts our focus from fiscal profits to cultural cohesion. You must define what a minimalist life for yourself entails and by assessing your wants you can become more deliberate in your everyday decisions—and begin in the lifelong practice of difficult but necessary living. Epicurus said that “He who is not satisfied with little, is satisfied with nothing.” On year 4 of revaluating the life I live, I’m starting to finally identify the little moments in my life that spark joy—and I hope you can find that too.