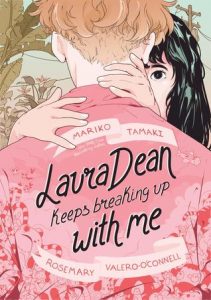 I know it was a couple months ago now, but did anyone else get the chance to go to TCAF earlier this year? I always want to buy ALL THE BOOKS, but physical limitations (e.g. do I have any more space on my bookshelf? No, no I don’t.) and financial ones (i.e. how much can I buy) coupled with moral ones (e.g. how much should I buy) always get in the way.

One of the graphic novels I had wanted to take a closer look at, but didn’t since I already nabbed a couple other titles, was Laura Dean Keeps Breaking Up With Me by Mariko Tamaki (co-author of This One Summer, which is on our Adult Summer Reads: Nostalgia list), illustrated by Rosemary Valero-O’Connell. I follow Valero-O’Connell on Twitter (@hirosemaryhello), so it had been on my radar right from the start. Even with the positive bias in mind, this one sucked me in right away with the composition, the reduced colour palette*, EVERYTHING. Its cast included a wide variety of LGBTQIA+ and BIPOC characters as well, which I appreciated (the protagonist, Freddy, and her on-again-off-again girlfriend Laura Dean are just one of the many non-heteronormative relationships in this graphic novel). When I take a step back and think about this particular aspect of it, the openness of the characters and their relationships in their high school environment, it gives me a bit of pause and I can’t help but think this must all be taking place in an alternate reality where there is no longer any discrimination against LGBTQIA+ and BIPOC people. Seeing a portrayal of a world in which this is the case, but is still based on historical events rooted in reality, was both life-affirming and a bit crushing (because we’re not quite there yet, with some work yet to be done).

Where I think Tamaki & Valero-O’Connell particularly excelled with this story is in the buildup – the grating effect Freddy’s insensitivity and total self-absorption have on everyone around her, as well as the reader, a result of her all-consuming love for Laura Dean – and the way it presents youth who don’t always make the right decisions, even at critical moments, are fallible in so many ways, but in so being portrayed are so relatable, even if you haven’t been through those exact circumstances. Their concerns, about how their own worries are privileged issues to be having, circling back on themselves about how past generations gave up so much just so that they can worry about regular, mundane things in a publicly non-heterosexual relationship in high school, are relatable ones. Their mistakes, too, we can imagine – if not ourselves making, then perhaps someone we might know.

I would highly recommend Laura Dean Keeps Breaking Up With Me to most audiences, probably from tween/teens and up (Groundwood Books suggests grade 9 as the target audience, which I do agree with, though I feel that middle schoolers might also enjoy it).

*The reduced colour palette reminded me of the use of colour in The Devil is a Handsome Man, which also makes use of minimal colour choices to great effect. That title’s available on Webtoon rather than in print. 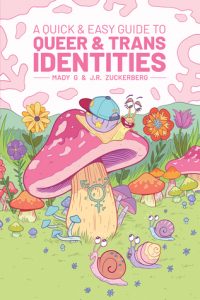 Another two titles I’m so very happy we got are: A Quick & Easy Guide to Queer & Trans Identities by Mady G. & J. R. Zuckerberg and, part of the same series, A Quick & Easy Guide to They/Them Pronouns by Archie Bongiovanni & Tristan Jimerson. Colourful and fun, I actually found the guide to queer & trans identities to be a lot more in-depth than I expected for a quick & easy guide, in that it was much more well thought-out and organized than I was expecting. The authors walk a fine line between giving an educational talk and keeping the reader engaged and interested (without feeling like they’re being talked at), and I think they do a good job of it. The fun, psychedelic cover and vibes help, I think, as well as the one layer of remove that comes of Queer &Trans Identities being narrated by… a snail. Beyond talking about sexuality, gender identities and what it means to come out, G. and Zuckerberg also tackle general relationship advice. The little story that flows from chapter to chapter ends on a note I’m glad for – there’s an acknowledgement there that not all relationships are going to go the way we want them to, and it helps illustrate what respect and understanding at the end of an intimate relationship could look like.

2 thoughts on “Laura Dean Keeps Breaking Up With Me”