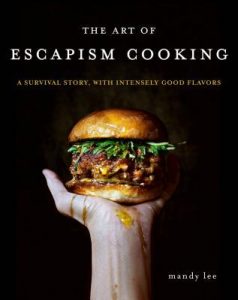 The crop that has grown the most prolifically in my garden this year have been my peppers*, and while I love eating them roasted, served with some homemade sourdough (lean or enriched dough, it’s all good) and a fried egg on top… it’s a lot of hot peppers. Some of which are those tiny little chilis not normally eaten peppered on toast with an egg over top (pun intended).

So I decided to make some hot sauce when a bunch of the Padrón, Poblano, and Tibetan lhasa peppers (along with a few Thai chilis) started to ripen around the same time, and stumbled upon Lady and Pups’ Mean Santa chili sauce recipe. Part of it is that her food photography is off the charts stunning and she (or her photographer) could probably convince me to eat just about anything through the photo alone, but what sealed it was the short ingredient list, plus copious amounts of photos detailing the process and what it looks like at every stage. I remember this author from her incredible cookbook The Art of Escapism Cooking, having only recently made the connection between Lady and Pups (whom I follow) and her cookbook (which I adored). The recipe is deceptively simple – I had everything except fish sauce, which I then acquired, and shiso leaves, which I left out – for the amount of flavour that comes out of it. Don’t get me wrong, your kitchen (and the living room, and maybe the entire floor) will smell for the entire day. But is it ever worth it! And definitely try it with eggplants as she suggests after the chili sauce recipe: perfect combination, and this coming from someone who doesn’t even enjoy eating eggplants.

I should make a note that this is a chunky chili sauce, a different beast from the vinegar-based hot sauce you might be used to. Think sliced rounds of chilies cooked in oil till they’re oozing with flavour, their natural smoky fruitiness paired with fish sauce (or soy sauce if you want to make this vegan/vegetarian) to increase the complexity and add just enough saltiness to it… the umami scale is next-level, and you’ll be salivating right by the pot as it’s cooking from the moment the peppers start to cook down and release all their delicious flavours, even as your hands start to tingle from cutting the peppers and continue to burn as you wait for the chili sauce to cool and develop even more flavour**. It’s worth it.

If you’re a spicy food lover and could probably imagine yourself spooning (mild or moderate) chili sauce into your mouth as a snack***, this is for you. For even more resources for hot sauce creation & use, see below the cut!

*My corn crop has been absolutely destroyed by one squirrel who visits the backyard garden and has no fear of people (or maybe just me). It stole and stole and stole all the corn and I only got to eat the one ear of Oaxacan Green Dent that matured before it started getting at the rest. A variety that’s not even meant for eating straight up so much as ground for corn flour. Tomatoes did alright, but I never trimmed them, so they grew a bit wild…

***It wasn’t too hot given my pepper choices. Don’t judge. 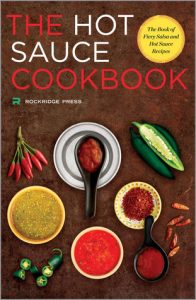 So now I’ve got some skin in the chili sauce making game. And the peppers are ready for round two (three, four?) of harvest. Not that I’ve got anything against making Mean Santa again, but we also have The Hot Sauce Cookbook (Hoopla Digital) published by Rockridge Press, which is a collection of 49 hot sauce recipes from around the world, including ways to use the sauces and oils.

But what if the sort of hot sauce you’re looking for is the sort that hails from Asia (yeah I know an entire continent and lots of variation, but…)? Red Hot Kitchen by Diana Kuan has got you covered, with recipes ranging from “Thai Sriracha to Indonesian sambal to Korean gochujang and other fiery favorites” (taken from book description). I don’t know about you, but after watching a documentary about Sriracha (2013), I’ve been interested in learning what actually makes a sriracha a sriracha. And apparently the OG sriracha sauce is not the ubiquitous Huy Fong sriracha sauce??? Mindblown. But whatever sriracha you’re using – there are other brands apart from Huy Fong, as I learned watching the documentary – there are a cornucopia of ways to use the sauce, from savory to sweet (yes, there are sriracha tinged desserts, which don’t sound so weird when you consider spicy chocolate, which is so delicious), and you’ll find 50 applications in Red Hot Sriracha by Melissa Petitto. 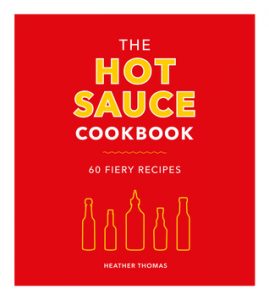 Has anyone else been getting any crops from their garden this year? I hear it’s been a pretty unfavourable year overall for tomatoes save for the odd garden or two (to which I can actually attest, given my tomatoes are a bit of a sad lot).

2 thoughts on “Hot Sauces, or What to Do with All Those Peppers You Grew This Year”