The Golden Globes air tomorrow night! If you know me, you know that I will most definitely be watching, donned in my finest sweatpants, armed with snacks and the Twitter app. Each year, I savor my personal tradition of watching the ceremony and loudly tweeting my opinions about everything. While I love awards shows, their glaring diversity problem has been the subject of heated discussion in recent years. The Globes (and the Oscars, and the Grammys, and all institutions) have racial biases, gender biases, geographic biases… So many biases, which this author will not be unpacking in this blog post, nor am I here to provide my personal commentary on this year’s nominations (though I will say that The Sound of Metal was robbed). Instead, I will reflect on my favorite Globe-winning dramatic television series, one that I believe was ahead of its time: Lost.

If you’ve never heard about Lost, or haven’t yet had the chance to watch it, it’s an ABC drama about a group of airplane passengers stranded on a very strange and mysterious island. Think Castaway meets The Twilight Zone. The show polarized viewers, particularly in its albeit questionable endgame. Over six seasons,  the show was somewhat drained of character diversity and any logic keeping the island afloat. Still, years after its series finale, Lost is enjoyed, discussed, analyzed, and lamented by fans and critics alike. I am currently in the middle of yet another re-watch and discovering some mysteries left unsolved or otherwise indirectly answered later on. Despite its contentious narrative arc, Lost will always be worth the watch for the character development and entertainment value alone. From the $13 million dollar pilot, creators J.J. Abrams and Damon Lindelof prioritized the show’s rich character stories over its web of myth and mystery. As for the latter: Lost was designed to be mob-solved, debated, and podcasted about. Lost doesn’t end at the credit scene, which is both its magic and legacy.

The show’s non-linear storytelling via flashbacks, a comparatively diverse ensemble cast, and some iconic cliffhangers have influenced many TV hits in its wake, such as This is Us, The Good Place, The Handmaid’s Tale, and countless others. Lost really has something for everyone – mystery, surprise, romance, action, friendship, laughter, regular excuses to cry, beautiful island views, a killer soundtrack, that early 2000s flare, and, above all, an honest reflection of human nature… Honest for primetime television, at least. 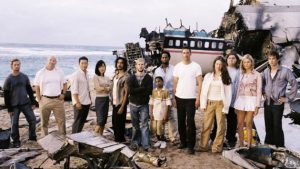 Before I go on – yes, this is a biased review. I have been a fan since Oceanic Flight 815 first crashed in 2004, when I was just 8 years old. Now neck-deep in my current re-watch, I find myself relating very differently to the characters as a 25-year-old than when I first watched the show live, running to get my jammies on during the commercial breaks. As a kid, I thought in extremes: there were bad guys, and there were good guys. It’s literally spelled out for us in the pilot by John Locke: “Two players, two sides. One is light, one is dark.” While Lost plays with the theme of good vs. evil, it simultaneously subverts and dismantles that concept through the show’s beautifully nuanced characters.

Though  white and male-dominant, the cast is comparatively diverse without tokenizing characters, as most of Lost‘s analogs are wont to do. In Western film and television, BIPOC characters are typically peripheral, underdeveloped, and used to create the appearance of diversity. “That’s one of the reasons I’m so proud of this show,” Daniel Dae Kim, who plays Jin, said. “It shows America and television executives and movie producers that you don’t have to have a lily-white cast of twentysomethings to have a successful project. The story lines speak to America regardless of color and can even be enhanced by mixtures of race and gender.” It is apparent, looking at recent award show nominees and winners, that this is a persisting problem to be addressed in Hollywood some seventeen years later.

For those of you yet to take the plunge: Vaughan Public Libraries has seasons one through six available to rent. Enjoy the journey! This is a television binge that will always be rewarding, whether you’re watching for the first or umpteenth time. And for those of you who are already fans of Lost, what did you think of it? Who were your favorite characters? Let’s try to keep this a spoiler free zone…