One month ago – or last year (ha-ha) – on December 11th, Taylor Swift surprised us with her second number one album of the year. To the delight of cottagecore fanatics far and wide, Taylor released a “sister album” to the summer hit, folklore. Titled evermore, this sister did not disappoint, earning both critical and commercial success. Both albums were products of isolation and remote collaboration. In The Long Pond Studio Sessions documentary, Taylor describes what this process looked like for her: from building an at-home studio to fortuitous text exchanges between herself and collaborators (primarily: Aaron Dessner, Bon Iver, and Jack Antonoff), which ultimately led to the manifestation of these two record-breaking albums. In a cavity of forced seclusion, Taylor escaped to invented lives and shared these with the world with an astonishingly rapid and scaled-back album rollout. 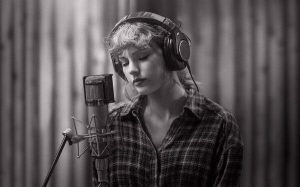 The massive popularity of both folklore and evermore indicates that we are all in need of a mental getaway. evermore offers a refreshing array of intricate, intimate, lyrical stories. Some lighter tracks, in true Swift fashion, explore the highs and lows of love (“willow”, “ivy”). On the other end of the spectrum, “no body, no crime” featuring HAIM has a deceptively simple tune and the narrative structure of a good, clean, country ballad – but it weaves a tale of infidelity and murder in 3 minutes and 35 seconds. There’s something for the whole family!

On her evermore songwriting process, Taylor revealed, “My world felt opened up creatively. There was a point that I got to as a writer who only wrote very diaristic songs that I felt it was unsustainable for my future moving forward. So what I felt after we put out folklore was like ‘oh wow, people are into this too, this thing that feels really good for my life and feels really good for my creativity… it feels good for them too?” This “post-pop Swift” is experiencing a somewhat unexpected career boom; during the elaborate rollout for her seventh studio album, Lover, Taylor expressed that she felt herself nearing the end of her widespread popularity. She has proven herself wrong. Taylor Swift’s career has not only survived but flourished over fourteen years, ten albums, and two distinct genre transitions (from country to pop to folk). The singer-songwriter is topping charts once again, simply by writing what she felt like writing, with whoever she felt moved to work with.

As both a creative and a die-hard Swiftie myself, I took this revelation to heart. 2020 was a difficult year, yet much of the narrative surrounding this newly acquired “down time” involved productivity – the mindset that we should be doing something with the time we have at home. Taking the pressure off productivity and shifting the focus to the joy of creation is inspiring (and more difficult than it sounds).

Of course, in artistic practice there will always be obstacles to feasibility… Particularly in this moment, when remote collaboration is the only mode of collaboration, and home is the only studio. We don’t all have a mansion on the shores of Rhode Island to record in, Taylor. Furthermore, here’s a note to my fellow creatives in York Region: there are artistic resources offered by VPL (Coursera, CreativeBug, video equipment, and more) in addition to grants offered by the York Region Arts Council and Ontario Arts Council, which may relieve the financial strain of self-producing. These avenues of support can provide a gentle nudge of encouragement to get started on that idea you’ve been sitting on for a while.

“Before this year I probably would’ve overthought when to release this music at the ‘perfect’ time, but the times we’re living in keep reminding me that nothing is guaranteed,” Swift wrote in her Instagram post announcing folklore’s release. “My gut is telling me that if you make something you love, you should just put it out into the world. That’s the side of uncertainty I can get on board with.”

If ever there was a time to create for the sake of creation and fun, it is now. If there ever was a time for trying something and failing, it is also now (I am writing this next to a cross-stitch ring with a design that is supposed to be a cat but looks much more like a very strange, sad mouse). In the meantime, you can find me turning to Taylor Swift for my spiritual needs (escapism, inspiration, a good cry, etc.) If you care to join me, physical and digital copies of folklore are available to borrow here.