Heather is the Librarian II, Literacy and Readers' Advisory, with the Vaughan Public Libraries. Her job is to connect leisure readers and aspiring writers with the endless space of imagination and creation through words in all forms. View all posts by Heather →

The Giller Prize 2021 longlist was announced on September 8, the International Literacy Day. From these twelve titles that were chosen amongst the 132 books submitted by publishers across Canada, the jury announced the finalist on October 5, and these five titles will be competing for the most prestigious and richest Canadian literary award on November 8, 9 PM.

This year’s longlist selection is as diverse as Canada itself – in the jury’s words, the longlist “showcases an ecstatic diversity of voices and styles, of narrative deployment and moral urgency, of formal innovation and old-fashioned storytelling pleasure. There is something for everyone on this list, but within each of these books there is to be found beauty, honest reckoning, human compassion, and the irrefutable mark of the sublime.”

Each longlisted title is brilliant and unique, but part of the game is that the jury must pick out five finalists and one winner. How brutal! Fortunately, that doesn’t mean that we can’t talk about the longlisted titles that didn’t make the shortlist here (thanks to VPL for giving us this platform!). So, the three books that I’m going to share with you, one made the finalist, the other two not, yet all of them are definitely worth-noting.

Believing in fiction’s power to make a change in the world, the former The Globe and Mail journalist, El Akkard, became a full-time novelist. After his award-winning debut novel American War, his second novel What Strange Paradise is again creating tremendous impact – it is now in this year’s Giller shortlist.

What Strange Paradise offers a timely response to the refugee crisis at the southern U.S. border and the migrant crisis in the Mediterranean. It is a harrowing read, right from the first line: “The child lies on the shore. All around him the beach is littered with the wreckage of the boat and the wreckage of its passengers.” But, as readers’ hearts are going to break, El Akkard gives them hope: “A wave brushes gently against the child’s hair. He opens his eyes.” When the child, the only survivor of the shipwreck, awakes in the Greek island and tries to escape from the authority, Vanna, a native teenage girl, did everything in her power to save him. (The Globe and Mail)

It’s a wonderfully told story about humanity in its simplest form, where right and wrong is crystal clear – a much-needed, powerful message in the midst of this world’s never-ending, tumultuous sociopolitical upheavals! (Quill & Quire)

END_OF_DOCUMENT_TOKEN_TO_BE_REPLACED

Travel is one of the most missed activities during the pandemic, and the lowering Covid positivity rate is certainly giving us hope to resume international travel – soon, not quite yet! For now, we can continue to quench our thirst with videos and travel guides, I suppose. And, if you haven’t, what about reading a few popular novels from the countries that you want to visit? I know, you may question how much fiction will actually tell us about the real world, but I would say fiction is arguably one of the best channels to immerse ourselves into a different culture. A well-researched novel can tell us the most intricate nuances of another culture: their people, their life, their ideologies, their desires, and their dreams – the hidden world that we can’t easily access when we do a two-week or three-week travel.

I will start with East Asia in this post. There are so many great books from this part of the world, and I wish I could include more titles, but let’s start with three that I know.

The Three-body Problem by Cixin Liu

The three-body problem is unsolvable, “as the motion of the bodies quickly becomes chaotic” (Britannica). In this first installment of a trilogy, the Hugo Award winning author asks the most classic and unanswerable question in hard sci-fi: “What would it mean for the human race to come in contact with an extraterrestrial intelligence?”

Because of the elaborate world building, the novel is a bit slow to start, but once it gets up and running, the thrilling suspense grips readers all the way to the end. The work offers many interesting “lengthy passages of technical exposition about everything from quantum mechanics to artificial intelligence.” (NPR) While the unique historical backdrop (Cultural Revolution) requires some effort to chew on, Liu skillfully pushes the moral dilemmas beyond specific nationalities or abstract physics, and asks: “Is science truly objective and provable, or is it simply the best we can do given our limited understanding of four dimensions?” (Rick Riordan)

Set in the troubled times of the 1960s’ Japanese student movement, this elegiac, coming-of-age classic became a national hit in Japan after its publication in 1987 and soon received internationally acclaim. Murakami’s “North American” writing style may have helped popularizing this book worldwide, but in my opinion, while some portrayal in the novel is time and culture specific, the examination of many topics that concerned young people is universal across generations and cultures. From exploring sex and love to lamenting the hypocrisy in society and the ultimate existential pain – death, these themes are still relevant today and resonate across continents.

Born in 1982 and given the most common name for Korean baby girls, Jiyoung is the “millennial everywoman” whose role is defined by the male characters around her. But she has one more trouble – she impersonates the voices of other women. When she was asked to seek help for this psychosis, the narrative is taken over by her male psychiatrist’s medical records, with charts and footnotes, in strict chronological order, just as dull and claustrophobic as Jiyoung’s world.

This hotly debated bestseller in South Korea was published coinciding with the country’s #MeToo movement. Cho sharply “reveals gender inequality in all parts of the South Korean society, from the privileging of male children to workplace discrimination and harassment.” (Guardian) 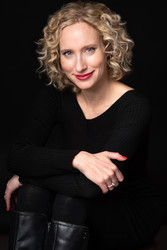 Thanks to Canada Council, The Writers’ Union of Canada and Simon & Schuster Canada, Samantha M. Bailey, author of the #1 national bestseller Woman on the Edge, will be visiting Vaughan Public Libraries’ Adult Book Club on May 20, 2021. I wanted to invite Samantha for two reasons: first, she’s originally from Thornhill and used to frequent the Bathurst Clark Resource Library (had I met her already?!); second, while many would agree that her bestselling title is most successful in the gripping pace, nonetheless it promotes mental health awareness in a way, just in time for the Mental Health Awareness Week in May.

I’d save most of the conversation about this intriguing psychological thriller and Samantha’s creative process for the event night. But if you can’t wait, take a quick peek at our Vaughan Reads video :)! Don’t forget to register on Eventbrite and enjoy an evening with Samantha on May 20! 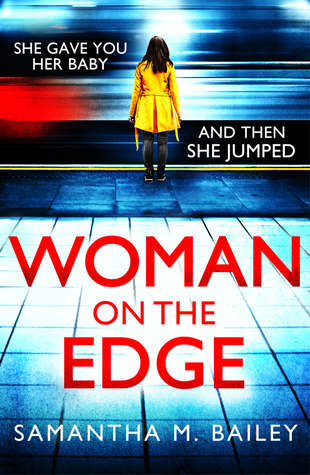 Here, I’d like to talk more about mental health. Although Samantha’s writing emphasized more on creating a suspenseful page turner than exploring the matter of mental health, postpartum depression was one of the sources that had inspired her work. Her depiction of the protagonist Nicole Markham’s postpartum depression symptoms is absorbing. I’m pretty sure it resonates with many mothers. I myself had experienced a long period of postpartum blue after I had my first child. Without any social support (no parents, no friends nearby, only a husband as inexperienced as I was), brand-new motherhood had struck me with far more anxiety than joy. Even now, I can still vividly recall how strange my feeling was when I first saw my son’s wrinkly, bruised face when he had finally been suctioned and forcepped out of me after thirty-six hours of induction and labour – my heart raced with panic and wondered if I could have returned him like returning a wrong-sized T-shirt, and that feeling had caused guilt in me in every single second of the next six weeks. I still remember I would wake up every twenty minutes at night, gasping, worrying that my son’s little life would go cold before I could enjoy it. I would constantly get up to check on his breathing, never mind he was always hungry and woke me up every one or two hours to be fed, while my body was still experiencing  severe pain from the traumatic delivery. Anxiety prevailed. Depression followed. The beginning of my motherhood was ever rough! Fortunately, the chemicals in my brain didn’t act up, and my symptoms gradually dispersed as my son became more playful about six weeks later.