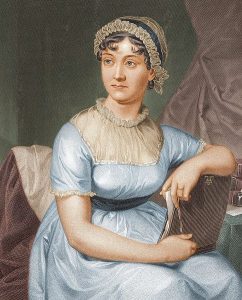 “It is a truth universally acknowledged…” that Jane Austen’s works have been adapted what seems like countless times, whether it’s a film adaptation of one of her novels or a modern retelling of one of her books, written by another author. There are also books written about Jane Austen and her family, as well as books about groups of Jane Austen fans. As an Austen fan myself, I often eschew any “updates” on Austen’s works. After all, what could be better than re-reading Pride and Prejudice for the umpteenth time? That being said, like many, I’ve spent a lot of time at home these last few months, and from the latest film version of Emma that came out earlier this year to binge-watching the TV series Sanditon, based on Austen’s unfinished novel of the same name, it feels like Austen is all around me. If you’re feeling inclined to go down the rabbit hole of endless Austen, here are a few recommendations. You can find Austen’s works in the VPL catalogue.

In Sense and Sensibility, the three Dashwood sisters and their widowed mother must leave Norland Park, the estate on which they grew up, after their half-brother, John, inherits it upon their father’s death. With little money, they find a cottage to rent. Marianne attracts the attention of Colonel Brandon. However, she finds herself infatuated with the charming John Willoughby. Meanwhile, Elinor forms an attachment with Edward Ferrars, but things get awkward when she learns of his prior engagement.

The novel was adapted in 1995, with Emma Thompson as Elinor, Kate Winslet as Marianne, Hugh Grant as Edward Ferrars, Alan Rickman as Colonel Brandon, and Greg Wise as John Willoughby. You can find the DVD here. The novel was also adapted in 2008 by BBC, starring Hattie Morahan (Elinor Dashwood), Charity Wakefield (Marianne Dashwood), Dan Stevens (Edward Ferrars), Dominic Cooper (John Willoughby) and David Morrissey (Colonel Brandon). A retelling of the story, From Prada to Nada (2010), features two sisters who are forced to move in with their estranged aunt when their father dies and they are left with no money.

In this YA retelling of Sense and Sensibility, Plum Blatchley is quiet and introspective, while her older sister, Ginny, has a flair for the dramatic. The two often get on each other’s nerves, but when their family is faced with financial ruin, they must support each other as they navigate the trials of growing up.

Perhaps the best known and most frequently adapted of all Austen’s works, Pride and Prejudice is the story of Elizabeth Bennet and her sisters and their romantic entanglements. When Elizabeth meets the wealthy Mr. Darcy, she finds him rude and prideful. But as she gets to know him, her feelings begin to change.

The 1995 miniseries starring Colin Firth as Mr. Darcy and Jennifer Ehle as Elizabeth Bennet is the adaptation against which all future Pride and Prejudice adaptations will be judged, because it is just that good. A more recent film starring Keira Knightley and Matthew Macfayden was released in 2005. The Austen classic got a Bollywood update in Bride & Prejudice (2004) with the stunning Aishwarya Rai Bachchan as the Elizabeth Bennet character, Lalita Bakshi, and Martin Henderson as William Darcy.

In print: Too many versions to count, with Helen Fielding’s Bridget Jones’s Diary among the most popular. Here are two recent adaptations:

Ayesha at Last by Uzma Jalaluddin

Ayesha Shamsi dreams of becoming a poet. Instead, she must put this dream on hold and take a teaching job in order to pay off her debts to her uncle. She is lonely, but she does not want an arranged marriage. When she meets handsome and intelligent Khalid, she is attracted to him, but finds him too conservative and judgmental. Khalid is also struggling to figure out what he wants, and he can’t get Ayesha out of his head.

Zuri Benitez is proud of her Afro-Latino heritage and her Brooklyn neighbourhood. When the wealthy Darcy family moves in, Zuri fears the impact that gentrification will have on the neighbourhood. At the same time, Zuri finds herself fighting her attraction to the handsome, snobbish Darius Darcy, while her older sister, Janae, falls for Darius’s brother Ainsley.

My least favourite Austen novel, Mansfield Park is the story of young Fanny Price, who at age 10 is sent to live with her wealthy aunt and uncle. She is treated unkindly by everyone except her cousin Edmund. While there, she meets the Crawford siblings. Henry Crawford decides to make Fanny fall in love with him, for his own amusement, while Mary forms at attachment with Edmund but spurns his lack of finances.

The 2007 adaptation by ITV stars Billie Piper as Fanny. There is also a 1999 version starring Frances O’Connor as Fanny and Jonny Lee Miller as Edmund.

In print: Perhaps not surprisingly, there aren’t as many retellings of Mansfield Park, but I did find one:

In this twisted take on Mansfield Park, Fanny Price is now a rich, spoiled heiress who is disliked by her neighbours and torments the bright and witty Mary Crawford. When Fanny is found murdered, Mary sets out to solve the crime.

Beautiful and charming Emma Woodhouse considers herself something of a matchmaker and believes she knows best. In her father’s eyes she can do no wrong. Family friend Mr. Knightley is the one person who can find fault with Emma. When Emma’s attempts to find a husband for her friend Harriet go horribly awry, she is forced to acknowledge her own mistakes and her heart’s true desire.

An adaptation of Emma was released earlier this year, with Anya Taylor-Joy in the title role. You can place a hold through the catalogue. Gwyneth Paltrow played Emma in 1996, but my favourite screen adaptation is the 2009 BBC miniseries starring Romola Garai, with Jonny Lee Miller as Mr. Knightley. Of course, no list of Emma adaptations would be complete without mentioning Clueless (1995). Alicia Silverstone’s Cher takes over the role of Emma, and Paul Rudd’s Josh serves as a stand-in for Mr. Knightley.

Smart, beautiful, and more than a little bored, Ania Khurana has successfully found a match for her spinster aunt. Next up, her sweet but helpless friend Dimple. When the arrival of her aunt’s handsome nephew from America causes a stir in Delhi, Ania gets caught up in the intrigues of Delhi’s high society, and must confront her feelings for childhood friend, Dev.

When Catherine Morland, an avid reader of Gothic novels, travels to Bath, she is introduced to Henry Tilney. The Tilney family invite her to stay at their home, Northanger Abbey, and Catherine’s overactive imagination leads her to expect something out of one of her novels. Over the course of the book, Catherine gains a better understanding of herself and the world around her.

The 2007 ITV adaptation stars Felicity Jones as Catherine and JJ Field as Henry.

Seventeen-year-old Cat Morland is invited to attend the Edinburgh Fringe Festival with her neighbours. There, she meets Henry Tilney and his sister, Eleanor. When she is invited to their family home, Northanger Abbey, her imagination runs wild as she imagines dark secrets lurking in every corner.

Eight years ago, Anne Elliot rejected Frederick Wentworth’s proposal due to his uncertain future and lack of finances. When Frederick returns to town, Anne finds that she is still in love with him. But is it too late for a second chance at love?

Recipe for Persuasion by Sonali Dev (On order. An eBook can be found on OverDrive)

When Chef Ashna Raje is asked to join the cast of reality TV show Cooking with the Stars, it seems like the perfect opportunity to save her struggling restaurant. Until she is paired with Rico Silva, soccer star and Ashna’s first love whose heart she broke when they were teens. Dev is also the author of Austen adaptation Pride, Prejudice, and Other Flavors.

The Stars We Steal by Alexa Donne

Princess Leonie “Leo” Kolburg has a title and a spaceship, but her family is in need of money and they expect her to marry a wealthy man. The return of Leo’s ex-fiancé, Elliot, whom her family disapproved of because of his lower status, could change everything. Now wealthy, Elliot is the most eligible bachelor of the Season. Leo finds herself falling in love with Elliot all over again, but is it too late?

Lady Susan is Austen’s epistolary novel about a charming yet amoral widow who is determined her daughter should marry the rich man her mother has chosen for her. Lady Susan was recently adapted into the movie Love and Friendship starring Kate Beckinsale.

Austen began writing The Watsons, about three sisters searching for husbands, in 1804 but later abandoned it. A streaming e-audiobook is available on Hoopla.

Jane Austen started writing Sanditon in 1817 but was unable to finish due to her declining health. The novel begins with Mr. and Mrs. Parker experiencing a carriage accident on the way to the Sanditon, a seaside town that Mr. Parker hopes to turn into a fashionable resort. While their carriage undergoes repairs, they stay with the Heywood family. Oldest daughter Charlotte Heywood takes an interest in Sanditon, so the Parkers invite her to come with them as their guest.  While there, Charlotte meets many interesting people, including Mr. Parker’s business partner, the wealthy widow Lady Denham, and his attractive brother Sidney. Sanditon was recently turned into a TV series, though sadly there is only one season.